Last Monday in New York there was an event called Media & the Law: The 3 Totenbergs, featuring what might be the most powerhouse group of sisters you’ve ever come across: 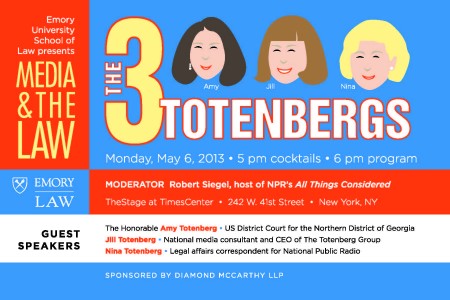 To say that these ladies cover the whole of “Media & the Law” would be an understatement, and their discussion on the intersection between the two showed just how much news, communications, and law really overlap in this day and age.

Judge Totenberg, for instance, discussed the extreme care with which she considers every opportunity to speak on the law (especially a particular case) because she is mindful of the many ways in which her opinions could be perceived and used.  This kind of circumspect approach should come as no surprise from a woman who spent a significant portion of her career working on civil rights issues, which require balancing the interests of one affected person with the handling of law governing entire groups of people.

Nina Totenberg’s perspective on the intersection between media and the law was quite different. Talking about how she views her role as that of a storyteller, she noted that she reports on the decisions of our High Court through the lens of historical context and future impact. Listening to Nina talk about the law and history made me think about a tapestry in the  midst of being woven. Her discussion about the media’s role, particularly today, showed the impact that interconnectivity and the rapidity of modern media has on the development of that tapestry—for better or worse. There was a clear cautionary note in Nina’s discussion about how being first to report something is never more important than being accurate in reporting it.

Jill Totenberg’s work around the law comes from the fact that, as a PR professional, she frequently advises law firms on public relations and communications issues.  Jill’s remarks emphasized the importance for professionals of being intentional, both about the message being conveyed and the way that it is conveyed. Attorneys need to take care in the service they provide, she says, but it is also important to “always care about your brand,” because lawyers are “hired based on trust.” As lawyers, we take so much care with what we say to courts and opposing counsel on our clients’ behalf. That same level of thoughtful consideration should apply to the message we convey about who we are as attorneys, which means really thinking about how to (and not to) use the media and social media.

As I listened to them talk, two things really struck me about these ladies that have nothing to do with their areas of expertise at all.  First, it was very apparent to me that the Totenberg sisters really love what they do. Each of them noted that while they inherited their drive for excellence from their father (legendary master violinist and teacher Roman Totenberg), they inherited a heart for service from their mother, whose passion helped put them on their respective professional paths. 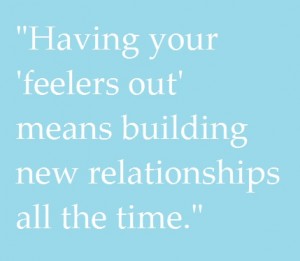 I had the opportunity to speak with Jill this week, and she said choosing a profession really comes down to “understanding what excites and challenges you about the work you are doing, and finding a place where that is what you can do at least eighty percent of the time.”

Jill noted that it’s not always a straight path to the career you love–she describes her own path as “zig-zagged”–which is why a professional should always have their feelers out, even when they’re not necessarily looking for a new job. To Jill, ‘feelers out’ means building new relationships, and working to maintain the ones you have.  “Having your feelers out brings you new ideas and makes you better at what you do,” she says. This ‘feelers out’ mentality ties directly to what Jill says is a key to professional excellence: “Communicate, communicate, communicate!”

The second thing that struck me about the Totenberg sisters is that although each of these women is exceptional in her field, they have managed to balance those careers with families and other interests outside the office. I asked Jill about this too, and she was quick to point out that there is no one-size-fits-all answer—“it’s extremely individual,” she says. She pointed out that, at different times in her life, different stages in her family’s life, the amount of time spent at work versus home shifted. She talked about how balance is really more about presence than a tally of hours spent in a certain place. And she noted that at the end of the day it comes down to a personal judgment call about what’s best in a particular situation.

Jill’s advice (which we frequently hear but don’t actually listen to all that often) was simple: “Don’t beat yourself up!”