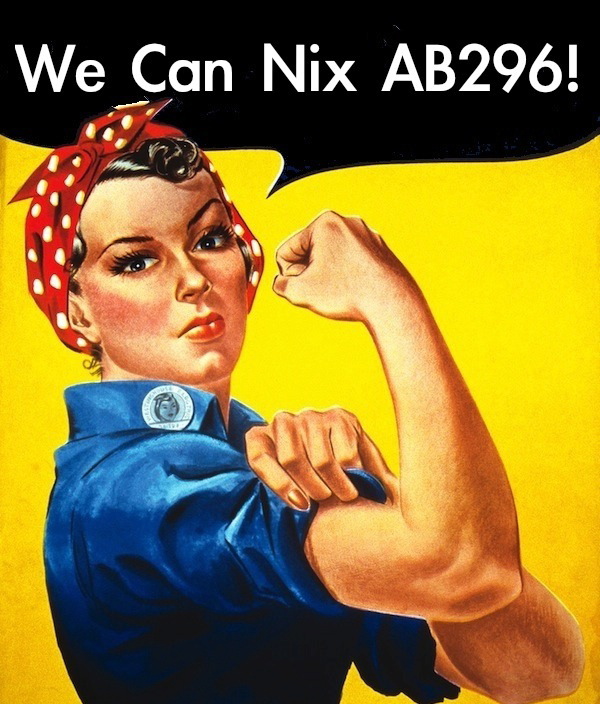 Yesterday, we launched our campaign to defeat California Assembly Bill 296, a bill that claims to help military spouse attorneys but Actually creates a harmful precedent for the largest military-populated state. You yelled, you screamed, you shared with your friends and neighbors. Still Assemblyman Donald Wagner, the author of the bill, is unwilling to budge from hollow flag-waiving and shift to real solutions.

NOW, it’s time to start calling. Our core mission is still under attack, and this is an all-hands situation!

Who should get involved? Everyone. We need high volume call traffic the rest of the week to demonstrate the importance of this issue, and of our conviction to #Nix296. That means calls from military spouses and servicemembers, as well as family members, veterans, community supporters, attorneys, lawmakers, businesses, and organizations supportive of military families. Bill supporters want to pigeon-hole this issue and downplay its importance to affected attorneys and their families. We need to send a clear message that is not acceptable. This is a readiness issue for military families. It is a military retention issue for the Armed Forces. It is an economic issue for military communities. Everyone benefits when military spouses are employed to their full potential.

But I don’t live in California, should I still call? YES. The voices of military families matter! Also, California has the largest population of active duty military, meaning it could be your next duty station. Our sample script:

I am a military spouse who relocates every few years, and I’m part of a national organization that is opposed to this bill because it’s bad precedent for all 50 states. Though I don’t vote in California, I have a significant influence over military voters there. My voice is just as important.

Who should I call? This is our priority list: the author of the bill, Assembly Member Don Wagner, and the members of the California Senate Judiciary Committee, who are scheduled to review AB 296 in their July 2 committee meeting. Calls are more effective, but we’re including emails as well.

What should I say? Tell your story! Speak from the heart and explain the burden AB 296 would cause for your military family. Sample script:

I am a military family member, and I oppose Assemblyman Wagner’s proposed Assembly Bill 296 scheduled for review at the July 2nd Senate Judiciary Committee. The amendment would require military spouses to take the first available bar exam upon arriving in California. Additional examination is the single largest employment barrier for military spouse attorneys and runs completely counter to what military families have asked of the state. AB 296 is not a good solution. It is a problem magnifier and must be stopped. I am asking every California legislator I know to oppose this bill, and you should too if you want to support the real needs of military families.

What should I ask for? MSJDN remains committed to working with California to develop a policy that removes career barriers for military spouse attorneys while protecting the public and meeting California’s high standards of professionalism. However, a policy that briefly delays yet still requires costly, time-consuming bar exams does nothing to assist us, and gives our potential employers little reason to hire us. California already gives licensing preferences to pro bono attorneys and in-house counsel. We are simply asking California to recognize that as a policy, military spouses are just as worthy.

What is the limit on the exemption MSJDN is asking for? MSJDN’s proposal requests an accommodation for the duration of active duty military orders in California, with appropriate public protection provisions included.

Isn’t this bill better than no bill at all? Absolutely not. It is very difficult to amend a bill once it has already passed. Translation> if we accept AB 296, we are stuck with AB 296. MSJDN cannot allow the passage of a bill that actually codifies a requirement that military spouses must take an additional exam. It runs counter to our mission. It send the message that the State of California places a low value on military spouses as attorneys. And it means negative precedent would then exist for other states to follow. We cannot let this happen.

How many military spouses will be eligible for MSJDN’s proposed accommodation? Honestly? No one knows. The Department of Defense does not keep track of how many servicemembers are married to attorneys. But MSJDN is the rallying point for military spouse attorneys, and through some extrapolating we can give you a ballpark.