Today marks the first ever National Ketchup Day, and people around the country are celebrating by sending Heinz Ketchup by the caseload to a single destination–the Washington Post.

Quite a random way to celebrate a random holiday, you say? Not if you have spent any time reading the Post this week. Or if you know that the cases of ketchup are coming from military families and military advocates. 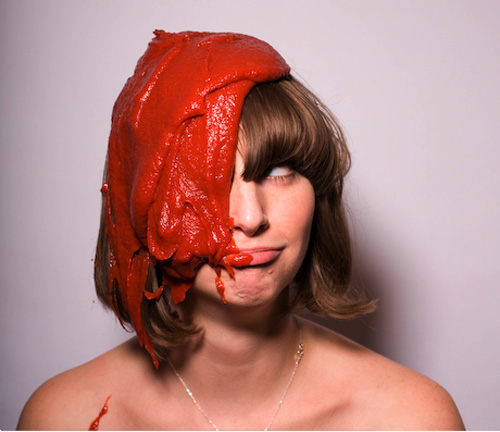 In what is unfortunately only one in a slew of articles by non-military authors decrying the “booming” and “lavish” benefits of serving in the military, Washington Post editor Rajiv Chandrasekaran teamed with a retired investment banker to provide yet another civilian-centric chronicle of budget woes, seeking to draw a straight line directly from those woes to benefits provided to military families. His evidence of excess? That the commissary at Camp Lejeune has fifteen types of ketchup on its shelves. Excess indeed. 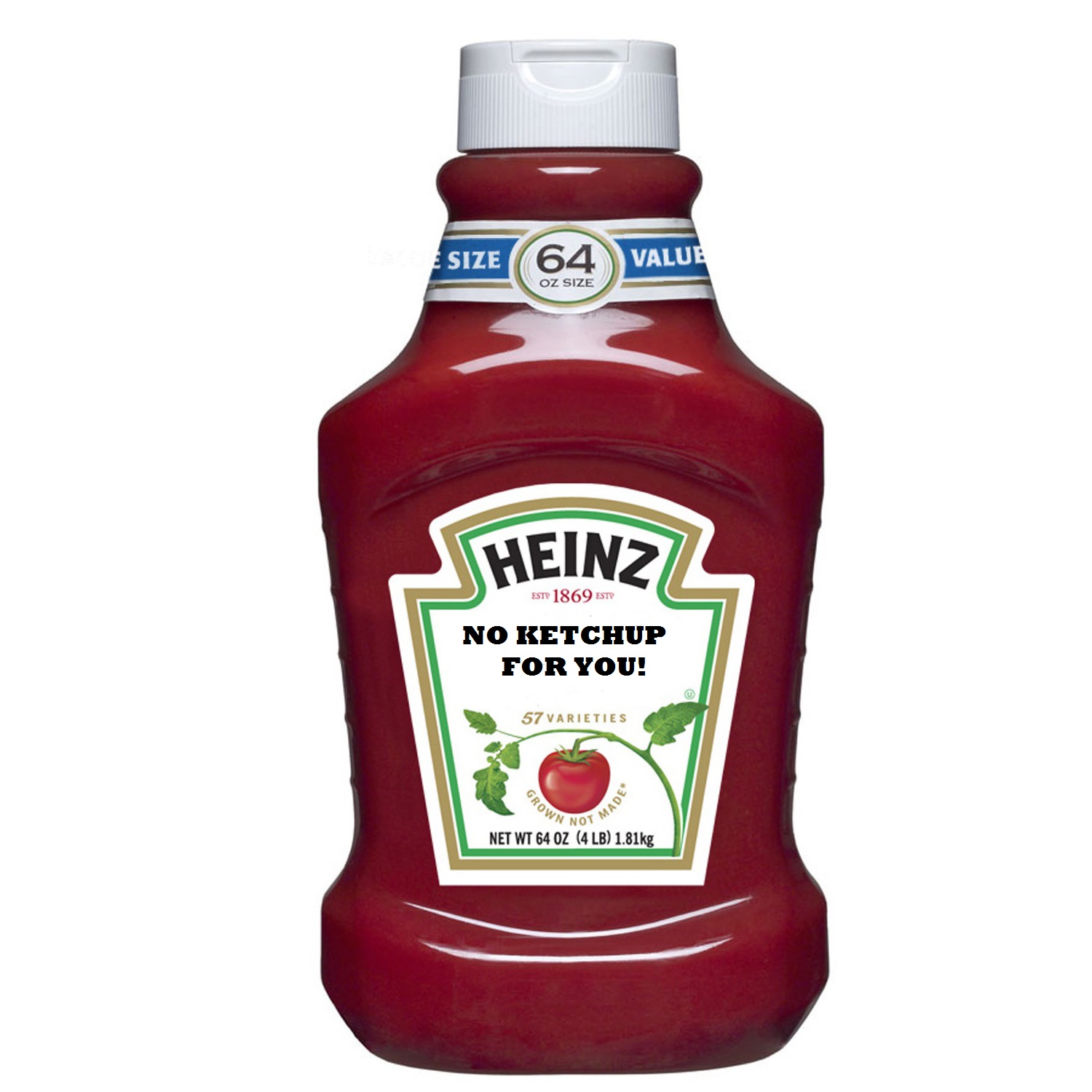 The response in the military community was swift, widespread, and considerably varied. NextGen MilSpouse offered a delightful piece of satire on the “Ketchupgate” scandal, proclaiming: “Military families everywhere are getting fat on the government dole. The latest example of the lavish military lifestyle? Condiments- specifically ketchup.”

Meanwhile, SpouseBuzz approached the Washington Post article and several others that preceded it via a novel method some have referred to as—wait for it—“fact checking.” The article addresses the various “facts” cited one by one, but it is the WaPo’s tone that takes the greatest skewering. And rightly so. Says SpouseBuzz author Amy Bushatz:

It’s a tone that says if you had to join the military to make it through life you are, logically, a substandard American worker and you do not warrant compensation in excess or even equal to the civilian market. Civilians are people who have choices and didn’t take the easy out of Uncle Sam. Military are people who are living off the tax payer.

Similar sentiments were echoed Rebekah Sanderlin at Operation Marriage, who pointed out in her post that, in addition to the many factual flaws she identified and addressed:

the larger problem with the story and the graphic, the thing that has many of us turning tomato red, is the implication that we are given too much, that we are pampered, that our compensation is somehow too heavy a burden for the country to carry. (Yes, please insert irony here.). It seems so obvious to us: If our lives are so good, so easy and so privileged, why isn’t everybody signing up?

This tone issue resonated with a number of authors, who responded with confusion to the seeming “about face” of civilians with respect to the military. The Left Face Blog notes:

The facts that are being massaged and trumpeted in articles that are popping up in various media outlets can be refuted; but what most of us were confused or angry about – as Amy again points out – is the tones, the snark, the anger at our community.  Many of us have been uncomfortable about the past overly positive and effusive (some say nauseating)   essays and speeches made about our community; the mythical attributes ascribed to us, the saccharine simplification of our lives as shown in Hallmark Channel movies. This about face, this veiled anger at us – the “you are a drain on the taxpayers” attitude – is all the more hurtful when you look around our community.  Coming right after Memorial Day when we remembered those who died in the service of their country, the slap in the face from these articles really resonated.

Karen Golden, a Government Relations Director for the Military Officers’ Association of America noted in her post that “Pitting readiness against personnel is a false choice and a breach of faith.” She continued:

What is really spiraling out of control is the rhetoric from powerful forces in Washington who are seeking to civilianize military pay and benefits.

Military Spouse Magazine co-founder Babette Maxwell writes that the divide between civilian and military is simply too great for them to “get it.” Enumerating the many experiences completely alien to the civilian world, Babette powerfully states:

To me and almost every other military spouse or service member out there who has any real knowledge of how our life works, you sound ill-informed and completely out of touch with any sort of modern day military reality.  You sound so bitter and so pathetically “have not” that I almost (almost) feel sorry for how little you really do know.

And the infamously irreverent “This Ain’t Hell” blog summarized how many feel but are yet to articulate via the title of its post: “Rajiv Chandrasekaran Doesn’t Like You.”

In what is the hardest-hitting of summaries, Col. Mike Hayden, USAF (Ret) compiled an analysis to show us the real facts and figures in context. On the MOAA blog, a separate March letter to the editor by Vice Admiral Norbert Ryan referred to a different WaPo article as a “screed” full of misrepresentations. But here, Colonel Hayden uses specifics to debunk the myths that media outlets tend to want to use to alarm our American public:

Congress has worked over the last decade to restore military pay comparability, repeal the retirement cuts and restore promised health coverage for older beneficiaries. In other words, the cost growth was essential to keep the previous cutbacks from breaking the career force. Most recent military compensation studies ignore that essential context and leap to the erroneous conclusion that cost trends of the last decade will continue indefinitely. Not so. Now that pay comparability has been restored, there won’t be any further need for extra pay plus-ups above private sector pay growth. Similarly, Congress won’t have to approve another TRICARE for Life program or pass another retirement restoration initiative. Those were one-time fixes that won’t be repeated. But by using a 2000 or 2001 baseline, budget-cutting advocates make cost trends look worse than they are.

And then, he used real numbers.

There are likely other responses out there as well that we simply haven’t run across yet. For our part, the Military Spouse JD Network took a two-pronged approach: (1) a light-hearted yet direct graphic to identify the ridiculousness of WaPo’s misguided narrative, and (2) a dialogue on our Facebook page and in the comments to the WaPo article, to get our members engaged in the conversation. As I pointed out in my own comments, one major problem with this genre of articles “about the military but not about the military,” is that actual military families have been completely omitted from the author’s text. So we are supplementing with our own. 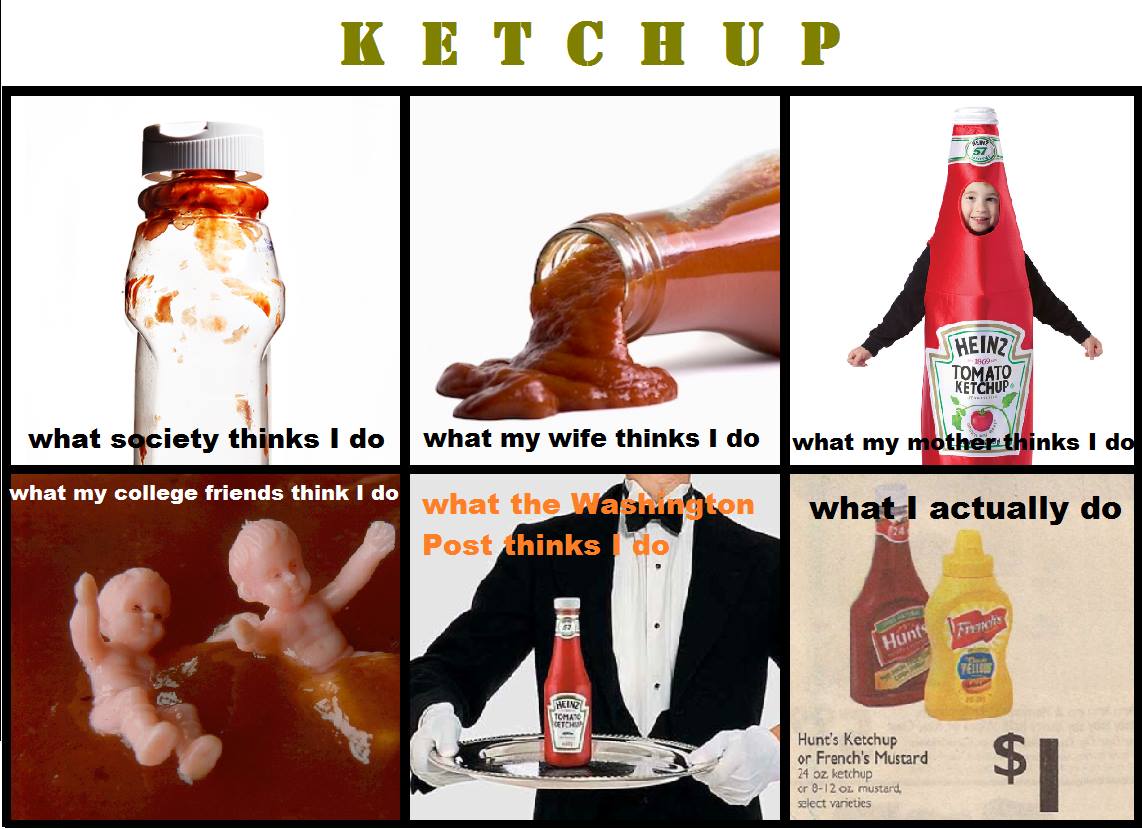 While some military spouses have decided to send cases of ketchup to the editor, you can do your part by simply joining us in the comment campaign, or just tweeting your favorite ketchup pictures to @washingtonpost and @rajivwashpost. We’re hoping the hashtag #ketchupgate2013 will provide both comic relief and perspective about cutting real military benefits.