Last week MSJDN achieved another state victory with the passage in Illinois of a licensing accommodation for military spouse attorneys, making it the fifth state to do so. That’s why we were so shocked to hear that California Assemblymember Don Wagner is sponsoring a new law that would set back our efforts in one of the most highly military-populated states in the country.

As proposed and amended, California AB 296 would require that military spouses take a bar exam, eliminating the possibility of a licensing accommodation. This bill has made it off the floor and will be considered next week by the Senate Judiciary Committee, under the guise that it supports military families.

On January 27, 2012, MSJDN sent a proposal to the State Bar of California for the passage of a licensing accommodation for military spouse attorneys. The proposal was based on policies adopted by the American Bar Association and the Conference of Chief Justices but tailored to California’s existing framework. The proposal allowed an attorney already licensed and in good standing in another jurisdiction to be admitted without examination so long as the candidate met all other requirements for admission including moral character and fitness, education requirements, and the absence of any ethics violations.

The public policy behind accommodation is simple: (1) help military families avoid the lost time and expense of multiple bar exams, (2) remove barriers and make the military spouse a more viable candidate to potential employers, and (3) increase retention of our country’s top officers and enlisted members whose military separation is directly attributed to spouse employment barriers.  Often a military spouse must choose between the underemployment that results from constant moves or maintaining a career by living apart from their constantly relocating servicemember. The employability problem is so great — over a third of military spouses were unemployed or underemployed in 2010 — that the White House now has special programs within its Joining Forces initiative to address military spouse career portability. Unfortunately, many of the gains made by Joining Forces and the Department of Defense are not enjoyed by attorneys because we are licensed differently than most other professions. That makes state-based support vital. 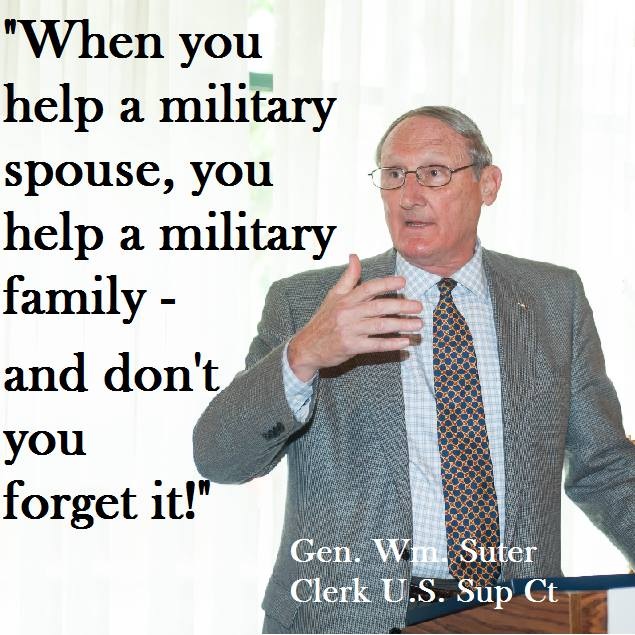 Somewhere along the way, the California proposal went terribly wrong. AB 296, ostensibly authored by Republican Assemblyman Don Wagner of the 68th District, includes language originally proposed by MSJDN. But what was previously a license to practice law turned into a temporary band-aid when a May revision converted the bill into a meaningless accommodation; it doesn’t give the relief MSJDN requests for our members because it requires the applicant to take the next available bar exam.

What AB 296 Actually Says to the American Public

Passage of MSJDN’s proposal in California should have been a no-brainer, especially for a state with the largest active duty military population in the country–over 162,000 servicemembers, representing 13% of the country’s total active duty force. California also has over two million residents that are military retirees. Other heavily-populated military states, such as North Carolina and Texas, have already passed MSJDN-guided accommodations, as have Arizona, Idaho, and, as mentioned, Illinois.

What is troubling is the message this sends to Californians, and our entire nation’s military. The California State Bar already allows public interest and in-house lawyers to obtain a license without bar examination. That means public interest lawyers are worthy of the accommodation. And so are corporate attorneys working for large corporations. But not military families.

AB 296 does not help military families because it codifies what we identify as the single largest barrier to a continuous legal career for a military spouse: repetitive, expensive, time-intensive bar exams. AB 296 is not just an imperfect solution, it is a problem magnifier. The fact that Assemblyman Wagner would describe it so effusively in his press release tells us that there is a fundamental misunderstanding in California of the very real barrier to employment that exists for non-California attorneys following servicemembers to the state.

MSJDN reached out to the State Bar of California for support against AB 296, but has been told that the organization intends to take no position on the bill. This sets California’s bar association at odds with groups like the New York State Bar Association, which wrote a letter to the New York Supreme Court endorsing a full licensing accommodation for military spouse attorneys.

MSJDN President and California lawyer Mary Reding expressed her concern. “The caliber of person it takes to go through law school and become a practicing attorney while serving alongside a member of our uniformed services is being underestimated. Missing out on people like that is a loss to California’s bench and bar. It’s a fixable problem, but AB 296 is not the solution.” Deputy Prosecutor and San Diego Military Spouse of the Year Lori Volkman echoed Reding’s sentiment. “Legislators want to help military families, but meaningful change comes from consulting us for a solution. AB 296 tells military families that the pro bono and corporate lawyers already in California are deserving of an exception, but they are not.”

It is MSJDN’s position that the passage of AB 296 will be harmful to military families, and we are asking all of our members and supporters to do three things:

1. Join us in opposing the bill via phone and email. By contacting the right people, you can let them know that this will not help military families. This document provides easy cut-and-paste messaging and contact information.

2.  Tell the State Bar of California’s Board of Trustees and the California Supreme Court that you support MSJDN’s version. MSJDN is committed to working with the regulatory body to craft a rule that will accommodate military spouse attorneys and protect the public through additional requirements like ethical coursework, additional malpractice insurance, and a framework for pro bono service for veterans, wounded warriors, and military families. We’ve done it in other jurisdictions and we know what works. Write to the Board of Trustees in support of an appropriate military spouse accommodation.

3. Spread the word via email and social media by sharing this article. Urge friends and family to identify AB 296 as a hollow flag-waving effort and show how it hurts all military families to remain silent. Empower them stand behind MSJDN’s proposal for a rule that will actually help military families and still adequately protect the public. We join the California State Bar’s effort to maintain high standards of professionalism and have drafted methods for ensuring that an accommodation takes these standards into consideration. We just need to be involved in the solution.