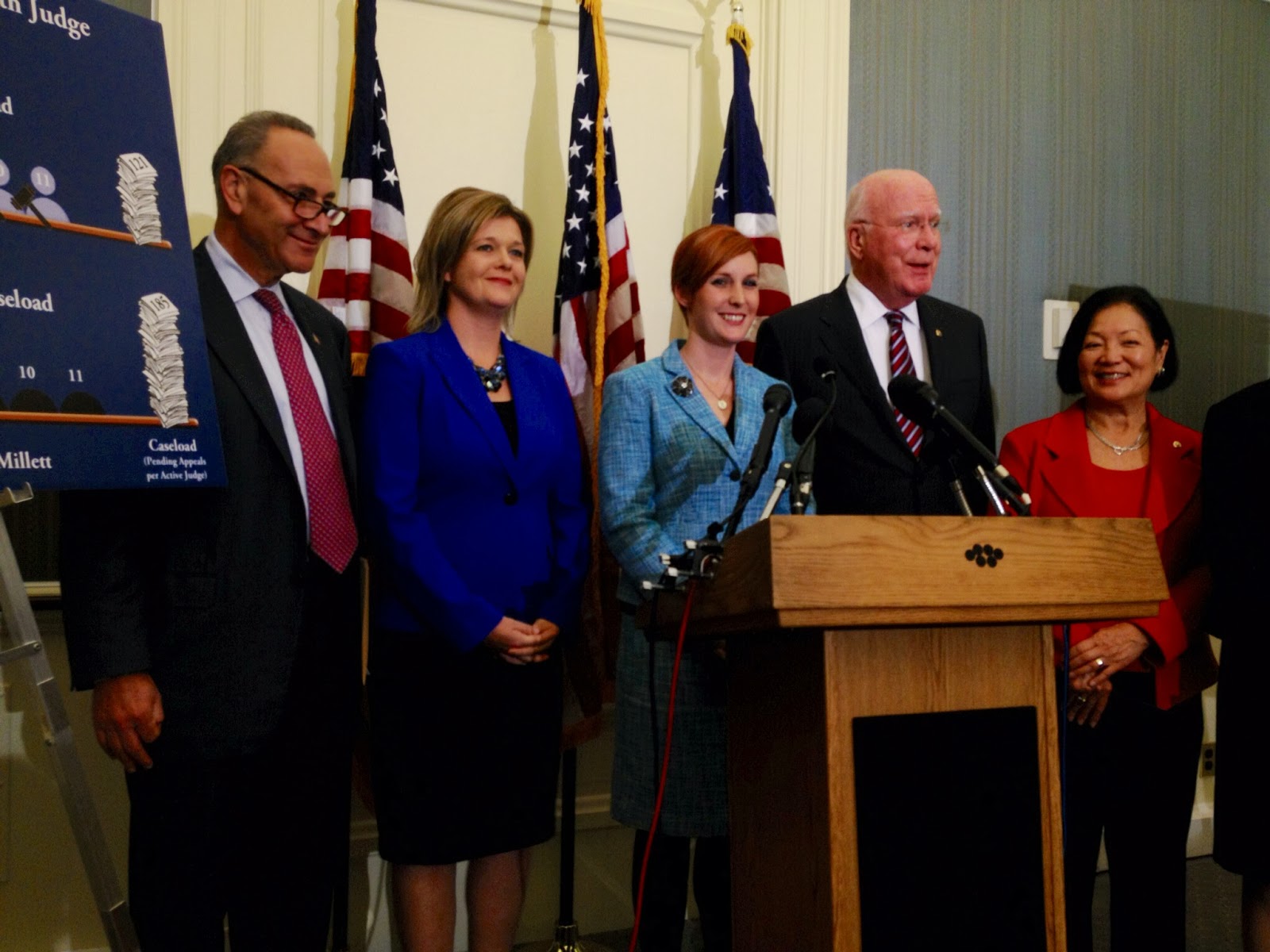 MSJDN has been busy the past two days on Capitol Hill, working to push past the politics and support fellow military spouse Patricia “Pattie” Millett, who has been nominated for one of three vacant spots on the DC Circuit Court of Appeals. Today, MSJDN stormed the Hill, appearing with Senate Democrats in support of Pattie and speaking at a press conference this morning. In their remarks, reprinted here, MSJDN President Mary Reding and Board Member Reda Hicks spoke on behalf of all military families about the difficulty in finding employment, the struggles our families are facing after 12 years of war, and the importance of supporting one of our own as she reaches the highest level of our profession.


Thank you Senator Leahy for providing me with the opportunity to represent military families in this conversation about our friend Pattie.   Thank you to all of the Senators who have taken time to attend today in support of military families.

I am the president of a bar association for military spouses who are attorneys, the Military Spouse JD Network.   As a non-partisan organization our mission is to improve the lives of military families by empowering military spouses.  Today we are here as the voice for military families and today, for us, is not about politics.  Today is about supporting one of our own.  Pattie’s story is our story.  After 12 years of war, sequestration, shutdown, and a sky high unemployment rate among military spouses – morale is at an all time low.  It is in these times that we look to the best of our profession and community for hope.

As a community we are watching to see if this military spouse will be given a fair shot at reaching the pinnacle of our profession.   Because, if she can do it, we all can do it.  A vote for Pattie, is a vote for all of us.


Thank you Senator Leahy for the opportunity to tell America about my friend Pattie.  Thank you to all the Senators who have taken time to attend in support of military families.

I am here today as a friend and a fellow military spouse.  Pattie’s story is one of exceptional achievement in every aspect of her life.  We have heard quite a lot today about Pattie’s professional excellence.  But somewhere in that rocket-propelled career, she fell in love with a sailor. And became a mom. And earned a black belt. And she has built her life on a foundation of faith and service.

As a partner in a law firm, with a three year old and a husband currently deployed to Afghanistan, I understand the demands of a legal career.  Keeping a family afloat on any given Wednesday can be tough.  That is why it is incredible to me that Pattie not only kept her family afloat during Bob’s deployment for Iraq, but she did it while arguing a case before the US Supreme Court, and briefing five more.   Despite all this professional success, the first thing colleagues mention about Pattie is her commitment to family, her church and her community.

From the time Pattie met her husband Bob at her church, they have built their lives and their family on faith.  Faith informs their core belief that they are put on this earth to serve. This includes their fifteen-plus years serving their country together while Bob was in the Navy; and serving together in the community they call home. Whether it is missions to far away places, or help for the homeless population right here in D.C., service continues to be part of Pattie’s every day life with her family.

Pattie continues to serve the military community as well, mentoring young military spouse attorneys, who are navigating many of the same difficulties she faced.  Pattie shows us what hard work, service, and character can achieve, and her success is success for all of us.

Military Spouses look to Pattie as a leader, an inspiration, and the best of our profession. And now we look to you to give her an opportunity to continue serving our country on the DC Circuit.  Please don’t filibuster Pattie’s nomination, she encourages all military spouses to reach our highest levels of achievement.  Pattie deserves to be confirmed. 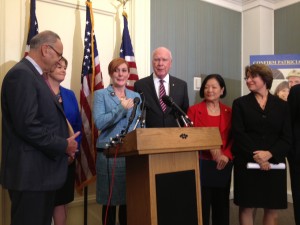 As the press conference came to a close, Senator Leahy asked Reda Hicks the significance of her pin. She explained that it is the Service Star, authorized to be worn by family members with a loved one serving in a war zone as were several others in the audience. Then, holding back tears, she went on to say, “We know there are politics at play here. We understand. But our leaders need to understand that you cannot support our troops without supporting their families. And military families want a fair shot for Pattie.”