MSJDN Named Finalist for US Chamber Hiring our Heroes Award 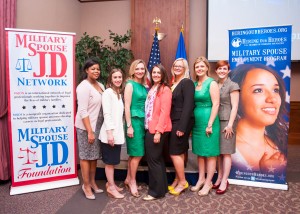 MSJDN’s Board of Directors at the May networking reception with Hiring our Heroes.

Military Spouse JD Network has been named as a finalist for the U.S. Chamber of Commerce Foundation’s 3rd Annual Hiring Our Heroes awards. The 18 nominated individuals and companies include corporate heavyweights Bank of America, Toyota, USAA, General Electric, and Lockheed Martin to name a few.

According to the US Chamber, those nominated have demonstrated leadership in addressing the challenges faced by veterans, transitioning service members, and military spouses in their search for meaningful employment.

MSJDN is nominated for the Military Spouse Employment Award for demonstrated hiring and support of military spouses in their search for meaningful employment in the private sector. La Quinta Inns & Suites and Wittenberg-Weiner Consulting, LLC, were nominated alongside MSJDN.

The winners will be announced tonight at the 3rd Annual Lee Anderson Hiring Our Heroes Awards Dinner at the U.S. Chamber.