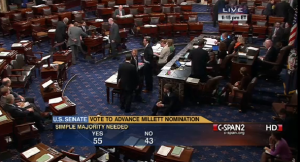 Today, over five months after President Obama’s June 4, 2013 nomination of Patricia Millett to the D.C. Circuit Court of Appeals, the Senate voted to close debate and proceed with the nomination to the judiciary of this exceptional military spouse attorney. Senators pushed through changes to the rules on judicial and executive nominations in the Senate. These changes mean that, instead of needing 60 votes to end debate, a nominee now needs a simple majority vote. This change will not apply to Supreme Court nominees.

A number of hearings were canceled or went into recess Thursday morning as Senator Harry Reid again brought forward Patricia Millett’s nomination. In October, her nomination had failed to overcome the sixty votes needed to close debate, or “cloture.” On Thursday, Sen. Reid twice brought her nomination up for cloture, failing to reach the 60 vote threshold both times. Then, with 53 votes, the Senate changed the threshold needed for cloture to a simple majority, or 51 votes. After the change, the Senate moved immediately to vote on whether to close debate on the nomination, which passed with 55 votes.

Senator Mitch McConnell (R-KY) echoed the concerns of many Republicans, saying such a tactic would be “breaking the rules to change the rules,” according to The Hill newspaper. The Washington Post notes that it alters nearly 225 years of precedent, allows for swift confirmation of executive branch nominees, and creates a path to approve most selections for the federal judiciary.

After this vote, Patricia Millett’s nomination still requires 30 hours of post-cloture debate before the confirmation vote can proceed. According to the Congressional Record, her confirmation vote will occur on Monday, December 9, at 5:30 p.m.

The Military Spouse JD Network, together with supportive and strategic partners, has been part of a groundswell of support to allow Patricia Millett’s nomination to proceed to a vote via the #ConfirmPattie campaign. Congratulations to our leadership and membership for having your voices heard and supporting this highly qualified and committed Military Spouse so that she could be considered for the position.