This is the third installment in MSJDN’s TRICARE For Kids: Time For Change series. The first post discussed the continuing efforts of Congress, health care advocates, and concerned military families to make changes in the way TRICARE administers pediatric care, particularly care for special needs children. This post and the posts that follow will tell the stories of real military families and their different experiences with their children’s healthcare under TRICARE. 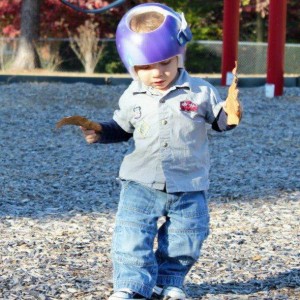 In 2011, Susan Reynolds learned that her baby boy Ian had plagiocephaly and would need cranial helmet therapy. Because Ian’s pediatrician was unclear on whether TRICARE would cover a cranial helmet and was reluctant to provide a referral to a pediatric neurologist, Ian was a year old before Susan was able to secure the neurology consult. It took another two months before Ian could get an appointment with the neurologist. For a cranial helmet to be most effective, Ian should have begun the therapy around six to eight months of age. Susan felt Ian was losing crucial therapy time because of TRICARE’s policies. She quickly learned to request the policy in writing and do her own research.

Susan learned that cranial helmets weren’t covered by TRICARE, but an invasive cranial operation would be. A helmet would $3,000, but the surgery was anywhere between $75,000-$100,000 and Ian would still require a helmet after the surgery. A cranial helmet on its own would be preventative and non-invasive, not to mention cost effective for TRICARE and taxpayers. Susan believed that invasive cranial surgery for plagiocephaly should be the last option, not the only option TRICARE would consider. The Reynolds family decided to pay for Ian’s helmet out of pocket and were able to secure a 50% discount. Susan has been working for the last two years to find funding and to reverse TRICARE’s policy on cranial helmet therapy.

In October 2012, Ian started getting frequent ear infections. Their closest military treatment facility was so crowded that Susan was never able to get an urgent care appointment with Ian’s PCM, so she was consistently referred to an off-post urgent care clinic. Doctors at the off-post clinic suggested that Ian might need ear tubes. However, because of certain TRICARE policies, Ian’s care was delayed. The first policy was that a child must have had five ear infections within a certain amount of time before a consult to an ENT would be approved. Susan agreed that this policy made sense. Unfortunately, TRICARE also required that the MTF must be responsible for diagnosing the five ear infections. Susan hadn’t been able to get Ian seen at the MTF, and despite bringing in records of Ian’s ear infections to the MTF, the consult could not be approved. Ian eventually had eight ear infections before he was able to get his ear tubes.

Advocating for All Military Children

Last year, Susan’s advocacy for Ian and other military children with special needs led her to become a member of the Military Special Needs Network. During her efforts to change TRICARE’s policy on cranial helmet therapy, Susan discovered the TRICARE For Kids initiative. At that time, the House had passed the bill and it was in committee in the Senate. Susan helped lobby for the bill and became a part of the TRICARE For Kids working group. Now that the bill has passed as part of the 2013 National Defense Authorization Act, Susan and the working group continue their efforts to work with TRICARE to implement the changes which will improve health care for all military kids, regardless of their health needs.

November 27, 2013 at 8:00 am
From the Members, Legislative Affairs
Tricare for Kids
Lavery, Maureen