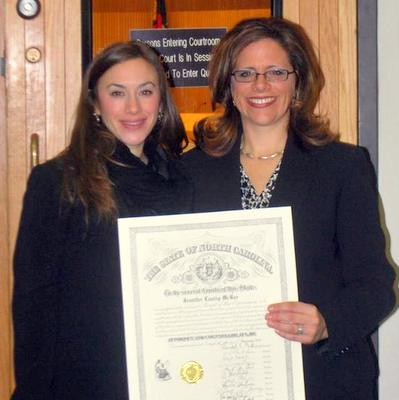 This week, North Carolina MSJDN member Jennifer McBee became the first sworn in and licensed under the military spouse attorney licensing rule in that state. This is her story.

The Military Spouse J.D. Network is changing lives! And they aren’t just changing a few lives, nor are they changing “ordinary” lives. Indeed, they are changing the lives of American military families. My family is one of those families.

A few months before I graduated from law school in 2004, I met my husband, Michael. Michael is an active duty Pararescueman in the United States Air Force. I was attending law school in Las Vegas, Nevada, with hopes of practicing law locally, and Michael had just been transferred to Nellis Air Force Base when we met. At that time, I had no idea how difficult it would be to both practice my profession and fulfill the role of a military wife. So, I pursued the man of my dreams and the position that interested me the most – the big firm job with demanding expectations and a long-term time commitment to truly advance. I practiced primarily in our firm’s commercial litigation and commercial bankruptcy groups. The hours were grueling, and the lifestyle was complicated with my husband’s repeated deployments, but I endured because I had worked so hard in law school to earn this sought-after position.

Five years into my practice, the Air Force ordered Michael to serve at Pope Air Field, North Carolina. Suddenly I realized that I had embarked on a life of oxymorons. My military life is mobile; my career is entirely immobile. As a military wife, I am my children’s only parent half of the year while my husband is away; as an attorney, my career demands my full attention all year long. As a military wife, I have committed to go when and where my husband’s service is needed; as an attorney, I must grow roots in one location to have any real chance of upward mobility or professional success. To be true to all of my commitments simultaneously suddenly seemed impossible.

When we arrived in North Carolina, I had a license to practice law in Nevada, a state that offers no reciprocity to any state. With Ft. Bragg and Pope Air Field in the local area, I felt confident I would find a position that would not require me to take another bar exam, so I sought positions as a civilian attorney for the Army and the Air Force. Little did I know, these positions are few and far between, highly coveted, and often meant for military attorney retirees. The idea of studying for and taking another bar exam to practice my profession in a state where we might only live for a couple of years was abhorrent. So, to pass the time while I waited for the next federal legal job to open up, I took a position at Methodist University as an adjunct professor of speech communications. While I enjoyed academia, I attended law school because I wanted to practice law. Moreover, I was not earning any money for my family; indeed, every meager penny I earned as an adjunct professor paid for nothing more than childcare while I was teaching.

And then I found out about the Military Spouse J.D. Network and their advocacy efforts in North Carolina for military spouse licensing accommodations. I applied for my law license immediately upon passage of the new rule. I have since become the first person in the State of North Carolina to be approved for a law license under its new Military Spouse Comity Rule! I anticipate having my license by the end of the year and embarking on a local job search in my chosen profession – law.

The barriers have been lifted in North Carolina and five other states due to the tireless advocacy work of the Military Spouse J.D. Network. There is, indeed, strength in numbers with this unique organization! My life is just one of the many lives impacted greatly by this network.