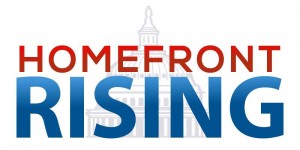 In October, Military Spouse JD Network (MSJDN) and In Gear Career announced that they would be co-hosting Homefront Rising, a ground-breaking, non-partisan event that will provide an innovative political educational opportunity to military spouse attorneys and other military family advocates. The event will be held on February 11, 2014, in Washington, D.C. You can register here.

The idea for Homefront Rising was hatched the day before last October’s government shutdown by MSJDN founder Mary Reding and Lauren Weiner and Donna Huneycutt, co-owners of Wittenberg Weiner Consulting, LLC (WWC) and board members of military spouse non-profit In Gear Career (IGC). Sitting together in the Capitol Hill Marriott, all three women waited with bated breath for the decisions that were being made in a chamber just a few blocks away.

They realized that unlike any other group in America, the decisions made on the Hill in Washington, D.C., directly impacted every aspect of a military spouse’s life. Just by way of example:

As such, it is imperative that spouses not only understand the political process, but also that they are engaged with it. Homefront Rising will provide non-partisan education to military spouses and advocates from the best experts in politics. The end goal is to encourage military spouses to become active in the process that affects them so profoundly.

Mary, Lauren, and Donna pledged a partnership between MSJDN and IGC to bring the event to fruition. They garnered further support from Women Impacting Public Policy (WIPP), She Should Run (a non-partisan organization advocating gender equality in public office), and the American Military Partner Association (AMPA).  We are excited to welcome elected officials, political experts, and campaign veterans to share their knowledge and experiences.

Attend the event in Washington, D.C. on February 11th.  Secure a place by registering!