Editor’s Note: This is the second installment in MSJDN’s series highlighting the employers MSJDN members say are going above and beyond for military spouse attorneys. Each employer in this series was nominated for MSJDN’s Member’s Choice Award by members who told us in their own words just how awesome their employers are. MSJDN is thrilled to tell these employer stories, as a way of expressing our gratitude for supporting military spouses as they build careers in the legal profession.

The MSJDN Member’s Choice winner will be announced at MSJDN’s Annual Reception in Washington D.C. on May 7. 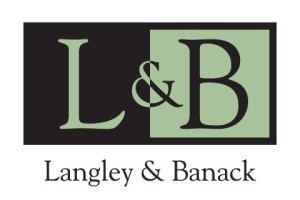 When member Natalie Wilson moved with her husband from Hawaii to San Antonio, Texas, she had no idea what to expect from the legal community she was walking into. She was a lawyer licensed in Hawaii, not Texas, and she was coming to the state long before it enacted its military spouse waiver process. Natalie knew the challenge set in front of her, and began reaching out through her network to get insights about firms that would fit her experience and goals, and not view her military affiliation as a professional negative.

It was through these contacts that Natalie found her current firm, Langley & Banack, a full-service regional law firm based in San Antonio, with offices throughout South Texas. To say that she was pleasantly surprised by her reception at the firm would be a gross understatement. That is why Natalie nominated Langley & Banack for MSJDN’s Member’s Choice Award, given to an employer that goes above and beyond to support military spouse attorneys.

“L&B has never wavered in the belief that my career can advance and flourish despite the challenges of military life,” says Natalie. The firm is understanding about the rigidity of her service member’s schedule, and goes out of its way to be flexible with hers. “They have never expressed concern that I won’t be able to handle my work demands, but have been very concerned about making sure I have all the support and flexibility that I need in order to meet all of my obligations at work and at home.”

Natalie says L&B’s commitment to her–as well as a second military spouse attorney they have since employed–comes from the firm leadership’s “deep and sincere respect for service members and their families.” That commitment includes not only supporting the military spouses in the firm’s employ, but also encouraging their involvement with MSJDN’s programs in Texas and around the country. And the firm is a supporter of the organization as well–in February, L&B was a sponsor of MSJDN’s Deep in the Heart event in Austin, Texas.

“Being in Military City, USA, they are certainly no strangers to the transient nature of our lives, but I have never once heard military affiliation being discussed as a negative when reviewing potential candidates, either for lawyers or support staff. L&B wants to employ good lawyers, without any regard to who their spouse is. To me, that is what creates a culture of genuine respect and support.”