MSJDN Visits the Supreme Court of the United States 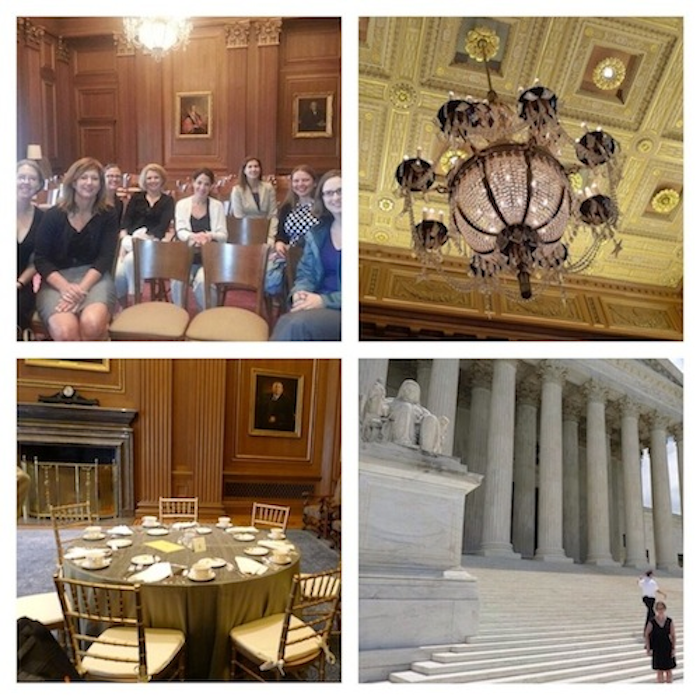 On May 30, 2014, approximately 20 MSJDN members visited the Supreme Court of the United States for a special “behind the scenes” tour.

After assembling by the John Marshall statute on the ground floor, tour guides took the group in to the Court Chamber, where oral arguments are made to the Justices. While in the courtroom, the group learned about the court’s history and had a chance to ask questions of the tour guides. They heard about Belva Ann Lockwood, the first woman to be admitted to the Supreme Court bar, even though the Justices first voted 3-6 against admitting her. The guides described the early history of the court, when it would meet only twice a year, as well as the construction of the current Supreme Court building and its opening in 1935, and the many roles of the Chief Justice. Did you know that the Chief Justice traditionally sits on the board of the Smithsonian Institution?

After visiting the courtroom, the tour split into smaller groups to view the Supreme Court library, a beautiful large two-story room with raised balconies and woodcarvings showing owls (symbolizing knowledge), unicorns, and mythical figures on the columns up to the ceilings. The tour then progressed back downstairs, with a stop along the way to hear about the first five Justices in one of the conference rooms decorated with their portraits. Finally, the tour wrapped up at the portrait of Justice Sandra Day O’Connor, a fellow military spouse attorney.

MSJDN member Wendy Knox Everette said, “It was an incredible experience to get such an intimate tour of the high court of our land, to be able to stand in front of the bench in the courtroom, and to sneak a look into the conference rooms and other working areas.”

Many thanks to Justice Sandra Day O’Connor and her staff for their support behind this educational and inspirational tour. Thank you also to Evelyn Guevara for her work coordinating this unique opportunity for the MSJDN membership.