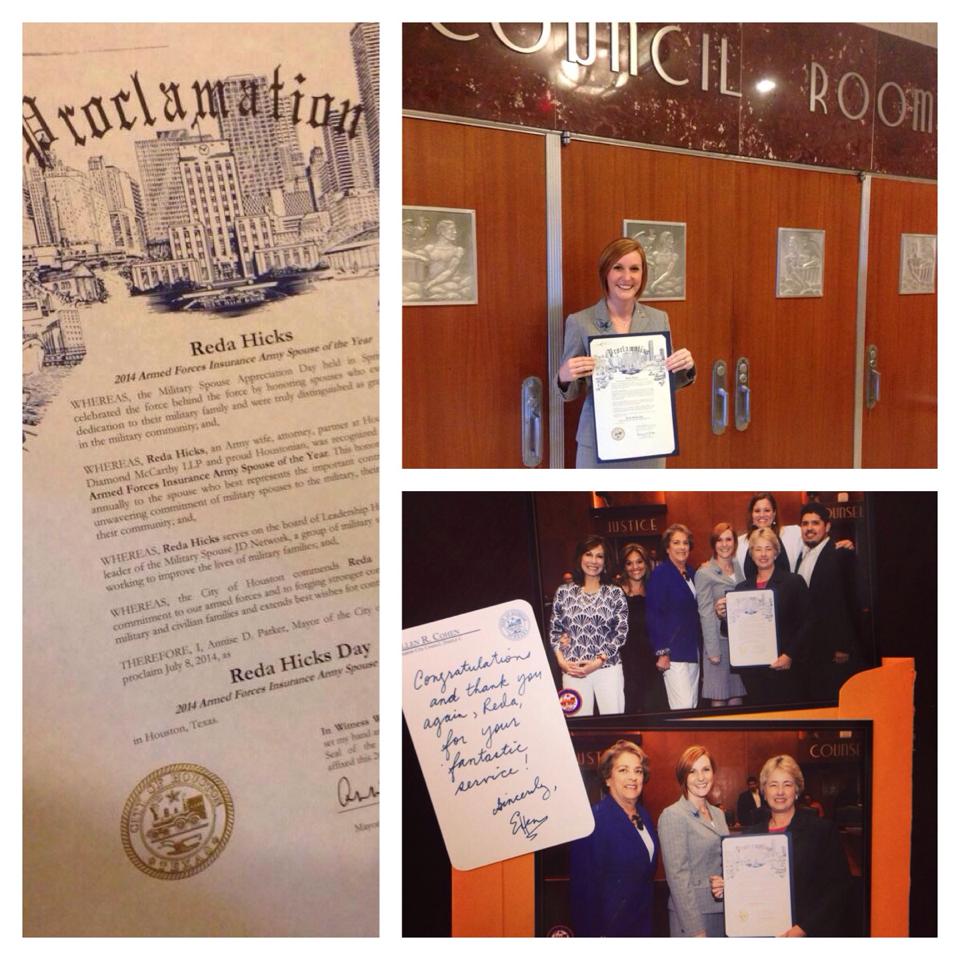 WHEREAS, the Military Spouse Appreciation Day held in Spring 2014 celebrated the force behind the force by honoring spouses who exemplified dedication to their military family and were truly distinguished as great leaders in the military community ; and,

WHEREAS, Reda Hicks, an Army wife, attorney, partner at Houston-based Diamond McCarthy, LLP and proud Houstonian, was recognized as the 2014 Armed Forces Insurance Army Spouse of the Year.  This honor is bestowed annually to the spouse who best represents the important contributions and unwavering commitment of military spouses to the military, their country, and their community; and

WHEREAS, Reda Hicks serves on the board of Leadership Houston and is a leader of the Military Spouse JD Network, a group of military spouse attorneys working to improve the lives of military families; and,

WHEREAS, the City of Houston commends Reda Hicks for her commitment to our armed forces and to forging stronger connections between military and civilian families and extends her best wishes for continued success.

THEREFORE, I, Annise D. Parker, Mayor of the City of Houston, hereby proclaim July 8, 2014 as

Naturally, having a day proclaimed in your honor in one of the largest cities in the nation is cause for celebration.  But Reda, MSJDN’s Governance Director and Newsletter Editor, was not content to simply enjoy her day, basking in glory and sipping champagne.  Instead, in typical Reda fashion, she turned her celebration, dubbed “Houston Hearts Heroes,” into an opportunity to increase awareness about military issues.  Go back to that last “Whereas” clause:  “the City of Houston commends Reda Hicks for her commitment to our armed forces and to forging stronger connections between military and civilian families . . . .”  Reda is such a tireless advocate for military families that she even leveraged a celebration of her advocacy into more advocacy.

Houston Hearts Heroes brought together civilians and veterans’ service organizations (VSOs), allowing them to forge important connections.  Houston is not generally considered a military town — it is not home to any major military installation, although it has a sizable reserve presence at Ellington Field, near NASA  — and Reda has persistently dedicating herself to educating her civilian friends and colleagues about military life, and how they can support military families.

Lindsay Munoz met Reda through Leadership Houston, and explained how important the education component of advocacy is for military issues.  Ms. Munoz explained that, through Reda’s efforts, she “learned [about] the harsh realities of how our military (and of course their families) draw the short stick time and time again when it comes to funding – be it health care, benefits, education – the list goes on and on. Honestly, from a young age, we all see lights shining on our military, with the parades and the national holidays, and the photos of crowds that gather at airports to welcome home our heroes. The pomp and circumstance is wonderful and gives great photos for social media and the press, but when the rubber hits the road and our military families need – say, mental health funding – our government is very quick to dim the light and point the finger to budget deficits. Reda has shined this light back on our elected officials and told them ‘it’s not right and it needs to change.'”  Ms. Munoz’s experience exemplifies how educating our civilian peers encourages them to be allies in efforts to protect and care for service members, veterans, and their families.

Civilian allies are also critical to the support of Veterans Service Organizations, which provide for many needs not addressed within the military system. In a city like Houston, which boasts a veteran population of nearly 200,000 and rapidly climbing, the role played by VSOs cannot be overstated. VSOs in attendance at Houston Hearts Heroes included Pets for Vets (which matches veterans with shelter animals and professionally trains the animals), Vets Journey Home (which provides opportunities to share their stories in a therapeutic environment) , Hope for the Warriors (which provides a variety of services to military families, gold star families, and veterans), and Lone Star Veterans Association (the largest association of Post-9/11 veterans in Texas). The VSOs were able to publicize their efforts and make important connections for new volunteers and resources. Samuel Luna of Vets Journey Home brought one of the veterans of their program to Houston Hearts Heroes.  The veteran had just gotten a service dog — when another attendee heard about the dog, Reda introduced them to Pets for Vets, who offered to train his dog and also asked Mr. Luna to refer another Vets Journey Home almnus to them to have his dog trained.

Chrystal Thompson, a Community Development Coordinator for Hope for the Warriors also made a valuable connection at Houston Hearts Heroes.  She met the Chairman of the Board for the Lone Star Veterans Association, with whom she discussed the synergies between the organizations’ employment programs for military spouses and veterans.  Ms. Thompson explained that, “As a national military service organization, Hope For The Warriors® finds that collaboration and partnerships with local organizations is key to effectively utilizing local resources to fulfill the needs of our military community.”

Houston Hearts Heroes did not simply celebrate Reda’s success as an advocate for military families, it built on it.  MSJDN continues to thank Reda for her indefatigable work on behalf of military families and be inspired by her incredible talent for utilizing her networks to catalyze ever-greater benefits for her community.  Congratulations, Reda!