On October 24, 2014, MSJDN Member Maria Chavez-Black received the Attorney of the Year award from the American Bar Association’s Immigration Justice Project (“IJP”) in San Diego, California.  The IJP’s mission “is to promote due process and access to justice at all levels of the immigration and appellate court system, through the provision of high-quality pro bono legal services for those in immigration proceedings in San Diego. The IJP serves both detained and non-detained individuals, and recruits, trains, and mentors volunteer attorneys and law students representing clients.” 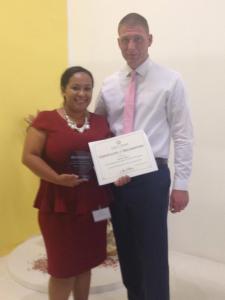 As part of the IJP’s efforts, it has developed a legal orientation program (LOP) at the immigration detention center where volunteer attorneys provide an orientation program to detainees facing deportation. Afterward, they meet with each detainee individually and guide them on their cases: help them fill out forms, gather necessary evidence, trial prep, etc. The IJP does not have the resources to actually represent all of the detainees who could use their help, but the LOP allows them to provide some assistance for those detainees that do not receive pro bono counsel.

From February to August of this year, Maria volunteered at the LOP twice every week. Additionally, she took two pro bono cases, which are still ongoing.  When they are resolved, she intends to take more cases.

Maria is licensed in Maryland and now resides in California, where her Marine husband is stationed.  Maria splits her working hours between a private immigration firm and a nonprofit that provides immigration legal services. She has been able to continue her career without seeking admission in California, because a local license is not necessary to practice before the immigration courts.  However, she may eventually pursue a California license since immigration law often overlaps with criminal and guardianship issues.Maria’s military spouse attorney journey has not always been smooth.  For the first four years after graduating and passing the bar, she did not really get to use her degree and contemplating switching fields.  But, she says, “now that I’m doing something I love, I’m incredibly happy and wouldn’t change anything about my journey. It made me who I am now and taught me a lot of things I wouldn’t have learned otherwise.”