Editor’s Note: MSJDN asked its members to help us spotlight employers that are going above and beyond for military spouse attorneys. Each employer in this series was nominated for MSJDN’s Members’ Choice Award for doing just that, by members who told us in their own words about the awesomeness of their employers. MSJDN is thrilled to tell these employer stories as a way of expressing our gratitude for supporting military spouses as they build careers in the legal profession.

The MSJDN Members’ Choice Award recipient will be announced at MSJDN’s Annual Reception in Washington, D.C. on May 6.

It is often true that some of the most unwavering support for military spouse employment comes from employers who once served themselves.  These employers aren’t intimidated by the unique challenges that a military spouse and his or her family may face because they have been there, and they know how a little understanding and flexibility can go a long way to improving the lives and well-being of a military family.  Such is the case of Paul Ryan of the Law Office of Paul J. Ryan in San Diego, California.  Paul is a former Judge Advocate in the United States Marine Corps and was nominated for the Members’ Choice Award by MSJDN member Libby Jamison for his support of not one but two military spouse attorneys.

Libby began working for Paul while stationed in San Diego with her Navy spouse.  “Paul understands exactly what I mean when I say we are PCSing, and he is flexible when it comes to assignments during times the military lifestyle causes an upheaval in my s 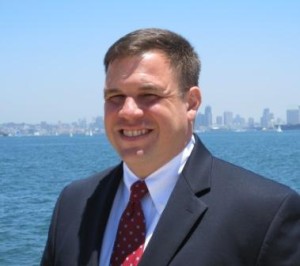 chedule,” Libby said.  When it came time for Libby and her husband to PCS to Florida, Paul continued to work with Libby remotely as a contract attorney wherever the Navy sends her. Multiple moves and states later, his support continues.  Libby praised Paul’s willingness to embrace technology to support his clients and to retain an experienced attorney to service those clients, while not placing any emphasis on “face time for the sake of face time.”  Paul also employs another attorney in the San Diego office who is a military fiancee.

Additionally, Paul is active in the legal community in advocating for the military.  He served as the co-chair of the Military Law section of the San Diego Bar Association, and he has supported MSJDN events in the San Diego area.

“I just can’t say enough about how supportive and understanding Paul has been throughout my relationship with his firm,” Libby said.  “Having my husband’s military service understood and respected, rather than viewed as a negative, has been such a weight off my shoulders as I work to continue my career while we bounce around the country.”

Employers like Paul Ryan are brilliant examples to other law firms and employers in all fields of the amazing impact an understanding and flexible employer can make in the lives of military spouse attorneys and their families.

Find out the recipient of the MSJDN Members’ Choice Award at the 2015 Annual Reception in Washington, D.C. on May 6th. Tickets and information available here.