On March 17, I attended a luncheon and panel discussion in Nashville, TN hosted by the Lawyers’ Association for Women-Marion Griffin Chapter (LAW). The presentation was conducted by our own Josie Beets, who was joined by Kathy Pohlid, a retired Marine Colonel, and Martha Boyd, a former Army Major. Josie began the discussion with an eloquent and moving narrative of the obstacles familiar to all of us as m 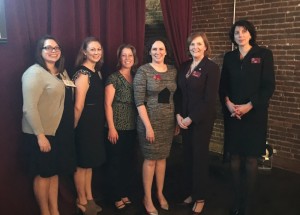 ilitary spouse attorneys. She addressed stereotypes that hinder our ability to find jobs and create barriers to the careers we had envisioned for ourselves upon graduating from law school and passing the bar exam.  Her speech insisted on the need for bar associations and individual attorneys across Tennessee to advocate for the adoption of the pending rule change for military spouse attorneys.

Following Josie’s presentation, Kathy and Martha shared the details of the current rule before the Tennessee Board of Law Examiners.  Upon opening up the floor to questions and comments, Judge George Paine, a retired bankruptcy court judge, Mr. Robert Tuke and Mr. James Mackler insisted on the absolute necessity of this rule.  All gentleman have been instrumental in reinvigorating the conversation with the Board of Law Examiners.  Their work has included letters, emails, and petitions to the insisting on passage of a rule that “just makes sense.”  Both Mr. Tuke and Judge Paine encouraged the audience to join MSJDN in advocating for a rule change in Tennessee.

Joined by fellow MSJDN members Alexis Wright Conniff and Johanna Thibault, I watched the room come alive with questions about how LAW both as an organization and individual attorneys could do more. As a new military spouse and an attorney early in her career, I have acutely felt the pressures over the past year of keeping a career intact and keeping my family intact. That day, as I watched the overwhelmingly positive response from the LAW members, I was reminded of the amazing parts of our military spouse community.  Without women like Josie, and advocates like Mr. Mackler, Mr. Tuke, Judge Paine, Martha Boyd, and Kathy Pohlid, we would not have been able to achieve the amazing progress for rule changes for military spouses over the past several years.