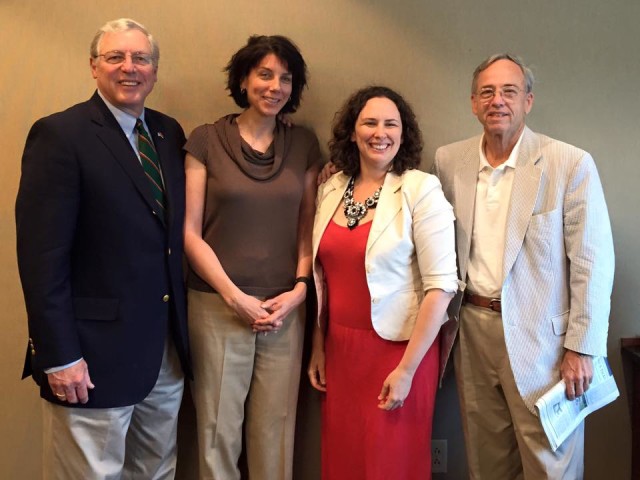 Any MSJDN member who has been involved efforts to secure a licensing accommodation for military spouse attorneys can tell you, our success usually is dependent on four things: hard work, good connections, timing, and a fair bit of luck. That’s definitely the case in Tennessee, where the Military Spouse JD Network has been working since 2013. Currently, the licensing accommodation proposed by MSJDN is pending before the Tennessee Supreme Court and is open for public comment. This is the story of how it got to that point.

In July 2012, my military family and I landed in Tennessee. I had a two year old and a newborn at home, I had left a job in Louisiana that I loved and had no idea how I’d make a legal career work in this new, unfamiliar jurisdiction. I didn’t qualify for admission on motion in Tennessee — some of my legal work did not qualify as “active practice” under the state’s definition. I put my resume out for jobs I was both overqualified and barely qualified for, hoping to get a bite.

In the meantime, I found myself relying on my fellow members of MSJDN more and more. Our private Facebook group was a safe space for asking tough questions about resumes, legal careers, military life and full time parenting. In large part from the supportive advice I received from fellow military spouse attorneys, I found myself leading efforts in Tennessee to secure a military spouse law licensing accommodation. I made some contacts, prepared a comprehensive, 50+ page report with other Tennessee MSJDN members, sent the report out to leaders in the state, and got radio silence in return.

A short time after that, I started a public policy job in Nashville. I connected with the women’s bar, the Lawyers Association for Women Marion Griffin Chapter (LAW). It was at a LAW meeting recounting the historic founding of that organization that I was renewed and re-energized my efforts to secure a licensing accommodation for my military spouse attorney peers. I even drafted an article for their bi-monthly newsletter. That summer, I redrafted the MSJDN report and rule, and submitted it to the Tennessee Board of Bar Examiners (BLE).

As I waited for the BLE to make a decision, I connected with a group of military veterans and leaders of the Nashville legal community who were immediate supporters of MSJDN, our mission, and the proposed rule. They helped refine and improve the rule, and then signed and submitted a petition directly to the Tennessee Supreme Court asking them to enact the proposed MSJDN rule. That petition was put out for public comment in April, and will close for comment at the end of this month.

The comments filed so far have been very supportive. Rep. Jim Cooper, U.S. Magistrate Judge Joe B. Brown, Judge Hamilton Gayden, Chancellor Carol McCoy, and many others have written individual letters of support. That in addition to the statement of support signed by 107 Tennessee lawyers who are military veterans, including 12 state and federal judges; letters of support from the Nashville Bar (which also published an article in their monthly journal), Knoxville Bar, and Memphis Bar Associations, the Tennessee Lawyers Association for Women, five retired Army Chiefs of Staff, and many, many others.

But more are needed before July 31st! We especially need to hear first hand from military spouses with Tennessee connections. If you are interested in submitting a comment to support military spouse attorneys, contact us at statelicensing@msjdn.org. Or you can send your comment to:

You can also submit your comment online at http://www.tncourts.gov/courts/court-rules/proposed-rules/submit-comment-proposed-rules. Select Supreme Court Rule 6, 7, and 8; the Docket number is No. ADMIN201500443.