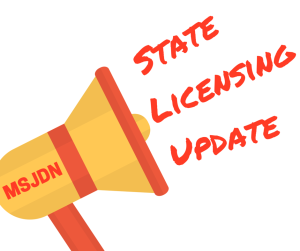 In November, Kentucky’s Supreme Court amended its admission rules to include a licensing accommodation for military spouse attorneys. Effective January 1, 2016, Kentucky Supreme Court Rule 2.113 will allow a military spouse attorney who is licensed in another state, in good standing in each jurisdiction where licensed, and living in Kentucky due to a service member’s military orders will be able to be licensed on a temporary basis while in the jurisdiction. Read the order for more specifics.

The Kentucky effort developed over several years, starting when military spouse and then-law student JonVieve Hill wrote an Independent Study paper during her last semester of law school on the challenges military spouse attorneys face. A version of that paper ended up in the Louisville Bar Association Bar Briefs’ November 2014 issue, where it caught the attention of legal leaders in the state.

In June 2015, the Kentucky Supreme Court published a proposed rule to be discussed at the Kentucky Bar Association Annual Convention in Lexington. The proposed rule was restrictive and required supervision. MSJDN’s State Licensing team reached out to legal leaders in Kentucky (with a strong assist from our Tennessee team) to explain why supervision was unnecessary.  MSJDN State Licensing Director Josie Beets and Kentucky MSJDN member Kaitlin Dean presented at the Convention’s open hearing and presented the amassed letters of support.

While we had wonderful letters of support from the Military Officers Association of America, five retired Army Chiefs of Staff, and other military leaders, we also found tremendous support from the Kentucky legal community. Led by the University of Louisville Law School, the deans of every law school in Kentucky signed on to a letter supporting licensing for military spouse attorneys without supervision, and several Federal judges joined the call. The Women Lawyers Association of Jefferson County also sent in a letter of support.

The most compelling letter, however, came from a Marine who separated from service and was attending law school in Kentucky. His wife, an accountant, had faced similar licensing issues and her ability to maintain a career was a strong factor in his decision to separate from active duty. He made a compelling case for the rule as a way states can help the military maintain its best and brightest.

Our success in Kentucky shows us that when military families speak, people listen — even in a seemingly immovable profession like law. This success and our ability to prevent a bad rule from being enacted has energized the State Licensing team!

Florida: As expected, the Florida Board of Governors voted down a proposal for general reciprocity at its 16 October meeting — but the military spouse licensing accommodation was NOT submitted as part of that conversation. The military spouse rule our Florida team has been working on for years is still pending and has the support of the Florida Bar’s Military Affairs Committee, who will be pursuing passage of the rule. This is great development is result of the hard work of the Florida team and their relentless networking!

South Carolina: Under the direction of state director Courtney Pawley Fleck, the South Carolina effort has enlisted the support of the Military and Veterans section of the the South Carolina Bar. That section has been working with the Board of Governors to make a recommendation to the South Carolina Supreme Court regarding a military spouse licensing accommodations. That report will be made Dec. 1, 2105, and we will keep you posted.

Alaska: In October, Alaska Director Emily Macey attended the Alaska Bar Association Board of Governors meeting where they voted on a proposed military spouse licensing accommodation. The rule before the Board passed, and now will be sent to the Supreme Court for approval. The final rule being presented waives the Alaska bar exam for military spouse attorneys in good standing in another state, present in the state on orders, waives the MPRE for attorneys who have received a score of 80 at any time in the past, and does not include a supervision requirement. Great work, Emily!

We continue to make progress in jurisdictions like Connecticut, Georgia, and Kansas, and have started the licensing accommodation process in states like Michigan and Pennsylvania.

We are only successful with our volunteer State Directors! State Directors lead our licensing accommodation efforts by educating the local legal community about the challenges faced by military families. Our Directors identify and reach out to stakeholders, facilitate one-on-one meetings and large presentations on behalf of MSJDN, and make the case for the temporary licensing of military spouse attorneys. The requirements are a passion for supporting military spouse attorneys, the ability to make a cold call with zero fear, and an interest in serving on a great team. If you’re interested in offering your assistance or leadership with state licensing efforts, email statelicensing@msjdn.org to volunteer your time.