The Real Men of MSJDN


The U.S. military is still overwhelmingly male – about 85% of the active duty force, according to the most recent Defense Manpower Data Center demographics report – so it comes as little surprise that the membership of the Military Spouse JD Network is overwhelmingly female. This is a spotlight on some of our male members and the unique viewpoint and challenges they bring to the table as male milspouse attorneys.

Our male spouses share the same experience as the MSJDN membership at large with respect to the difficulties of maintaining a legal career in the face of PCS moves and other military stressors like overseas assignments, deployments and geobach arrangements. Robert Alcorn had to leave his job of five years at a Texas law firm when his wife received PCS orders to Japan. In Japan, the opportunities for milspouse attorneys are extremely limited, and Robert taught English and eventually found a temporary position as a civilian tax specialist in the local JAG office. After the couple’s son was born, Robert happily became a stay at home dad, which he says gave him the “unique opportunity to spend time watching my son grow up that a lot of men don’t get to have because they are working full time.” The family is now living in Hawaii, where Robert took and passed the state bar exam and is 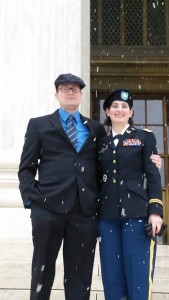 working full time at a local law firm. Jeff Kent also had difficulty finding work due to citizenship and licensing requirements when he and his wife moved to Australia for her assignment there, but he was able to secure a position at the U.S. Embassy. As other attorney spouses have experienced after working in a non-legal job (or not working at all) while overseas, Jeff is concerned about being able to find an attorney position upon returning to the U.S. after not having worked as an attorney for several years.

In terms of challenges due to their status as male military spouses, our male members say they have had few negative experiences, and most of their difficulties are those typically faced by milspouse attorneys regardless of gender. However, sexism is common. As Jeff pointed out, much of the sexism these men have reported experiencing is the unfortunately commonplace assumption that they are the servicemembers, and not their wives. Paul Jennings, a third year law student, attended an FRG social function with his active duty wife as a way to meet other spouses during the lead-up to the battalion’s deployment to Afghanistan. As the other wives joked about his presence at the FRG meeting, assuming that he was a soldier who had been browbeaten into attending, Paul’s wife’s commanding officer asked why one of his soldiers was seated with all of the spouses. The FRG did not ask him to any of their future gatherings.

The flip side of this exclusion is that male spouses do not frequently deal with the implicit pressure to take an active role in the FRG and other command family support groups that female spouses regularly encounter. Brian Cox, himself a JAG reservist and a former active duty member, feels this is an advantage to being a male spouse. Brian, whose wife is an active duty JAG, reports that he hasn’t personally experienced any sexism from within the JAG community, and feels that the community, which seems to have a higher percentage of spouses with careers, has been understanding and supportive of the challenges that face milspouse attorneys. Noting that a fair number of JAG spouses are also attorneys, Brian recognizes that his fellow spouses “tend to have the shared burden of abandoning (for a time) momentum on their own professional tracks.”

MSJDN is honored to count these gentlemen among its ranks!

December 1, 2015 at 7:00 am
Bars and Stripes, From the Members, Member Spotlight
Maryann Menanno