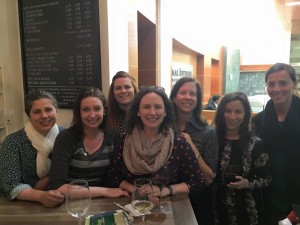 After three fantastic (and exhausting!) days in San Diego, I am happy to report back that MSJDN’s participation at the National Conference of Bar Presidents mid-year meeting was a huge success. MSJDN President-elect Josie Beets, Communications Director Libby Jamison, and I joined state bar presidents from all fifty states for a weekend of connections and conversations from February 4-6.

The purpose of the conference is to set the agenda for state bar activities, share creative programming, and address problems facing the profession. Josie, Libby, and I had the additional goal of sharing the MSJDN story with each state bar leader we met. Our purpose was to educate the state bar presidents and urge them to prioritize military spouse licensing rules in their states. 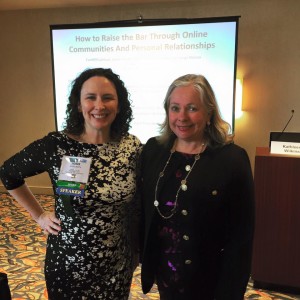 Josie Beets just before speaking to a room full of bar association presidents about making connections online and in person.

We kicked off the conference Thursday night with a reception where we gathered business cards and made great connections with several key states, including Florida, Kansas, Oregon, South Carolina, and Ohio. Friday morning, Josie packed the house with a tremendous turnout for her presentation on the MSJDN “virtual bar” and how we connect our geographically diverse members through technology and social media. As Josie explained to the audience, MSJDN would not have existed in a pre-Facebook world. After the MSJDN presentation, the Connecticut bar delegation stopped us to find out what they could do to license military spouses this year. In the 24-hours since the conference ended, Connecticut already has added the issue to their Rules Committee agenda!

We get more done in the hallway than most bar leaders get done all year!

The conference ran in parallel with the mid-year meeting of the American Bar Association, so we were in the right place to re-connect with the ABA leaders who have served as MSJDN mentors and supporters. We honored Estelle Rogers as she received the 2016 Drinan Award for Distinguished Service. We had productive hallway-conversations with the current and past presidents of the ABA, the past president of the DC Women’s Bar Association, the current president of the DC Bar, and senior leaders of the ABA. Libby participated in a tour of the San Diego Veterans Village organized by the ABA’s Coordinating Committee on Veterans Benefits and Services and she also attended a meeting of the ABA’s Commission on Women.

One of the highlights of the trip to San Diego was the MSJDN happy hour with our local members, a joint mixer with the local Thomas Jefferson School of Law. We had a great turnout from a fantastic group of attorneys. Although MSJDN is a virtual bar, the personal connections we make with each other are a treasured part of membership in this incredible organization. I’m proud to be a military spouse attorney and proud to represent MSJDN.

February 17, 2016 at 8:00 am
From the Members
ABA Conference, MSJDN Networking
Johanna Thibault