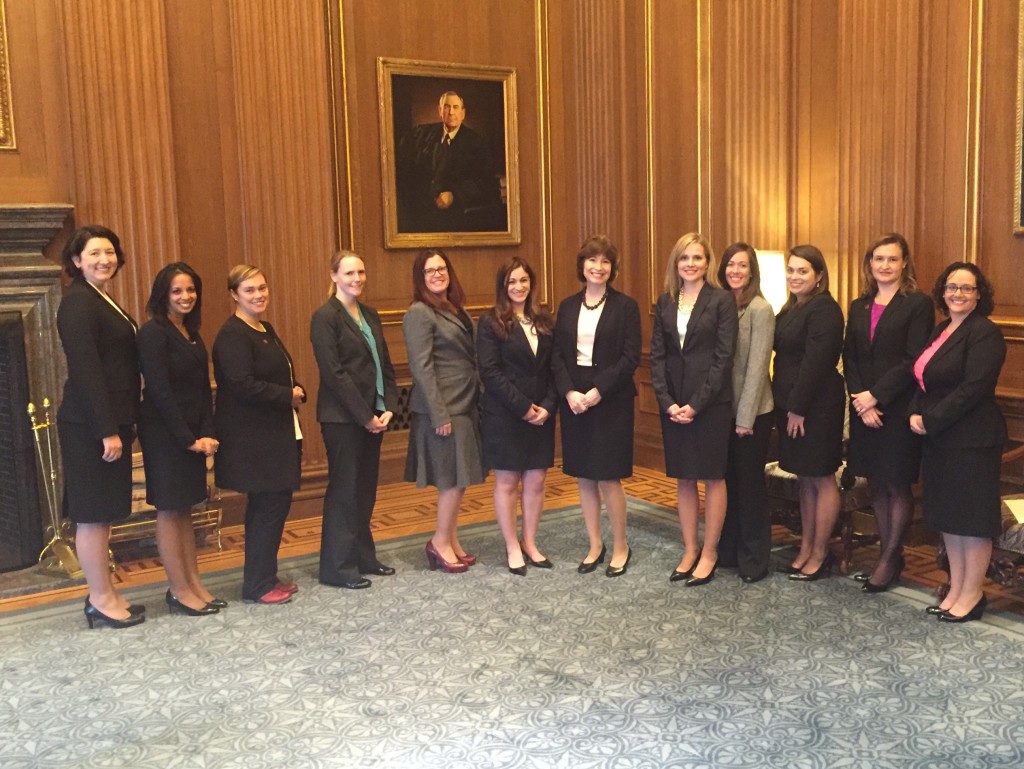 This morning twelve members of the Military Spouse JD Network were admitted to the bar of the Supreme Court of the United States. These military spouse attorneys were honored to be presented to the Court by one of our own, U.S. Court of Appeals for the D.C. Circuit Judge Patricia Millett, an attorney who reached the pinnacle of our profession while balancing the unknown of her husband’s military career.

Judge Millett was in the middle of an impressive legal career when she fell in love with a Sailor. They married, and like so many other military spouses, Judge Millett did the job of two parents while her husband was away on reserve duty. In 2004 he was called to deploy and left to serve overseas. During the deployment, Judge Millett continued her work at the Solicitor General’s office including a heavy Supreme Court caseload. She argued one Supreme Court case and briefed five more while juggling solo-parenting duties while her husband was deployed. Read more about Judge Millett in our 2013 profile. 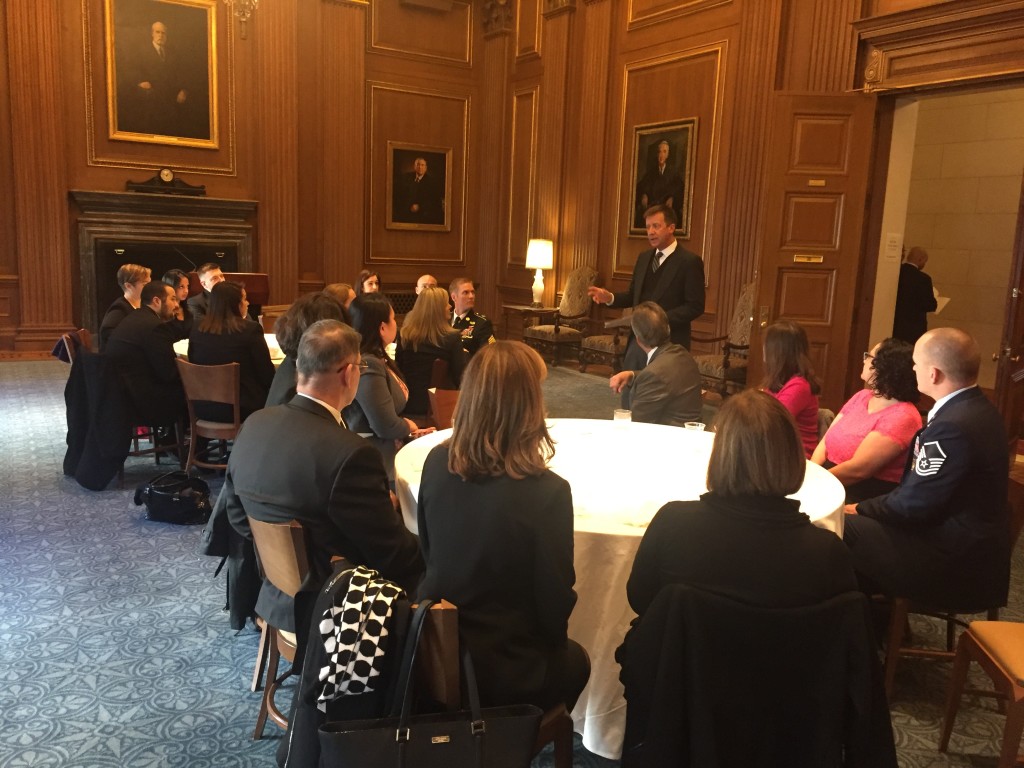 Clerk of the Supreme Court Scott Harris instructs the group on the admission procedures.

Our military lives can sometimes feel very invisible and lonely — and while much progress has been made to highlight and support military families, it is very often the quiet nights at home, while our partners are in warzones thousands of miles away, that are most difficult. Judge Millett is one of us. She represents over a million military spouses that serve both their family and country. She has endured the quiet, lonely nights. She has waited for a phone call from a war zone. She has experienced the heartbreak of explaining a daddy’s absence to a tearful child. She knows the joy of hanging a homecoming banner. And she has done all these things while building her career as one of the pre-eminent legal minds in the country.

Sponsored by fellow military spouse D.C. Circuit Court of Appeals Judge Patricia Millett, the military spouse attorneys enjoyed breakfast at the Court and oral arguments in addition to being sworn in to the Court’s bar. Family members and friends joined military spouse attorneys at the courthouse early this morning for a private breakfast for new admittees. Seated in court alongside the litigators preparing to argue their cases during the morning session, the admittees were front and center as the Justices took the bench. As Judge Millett read each name, the admittees rose and remained standing as the Clerk of the Court administered the oath. Once the oath was completed, the newest members of the Supreme Court bar took their seats and oral arguments began immediately.

Judge Millett is an inspiration to military spouses and working mothers everywhere. Her continued success reminds us that we can rise to the highest levels of our profession while balancing a home and family. This is the third time Judge Millett has sponsored a group of military spouse attorneys for admission to the Supreme Court Bar. Military Spouse JD Network members were admitted with Judge Millett as a sponsor in October 2015 and October 2014. 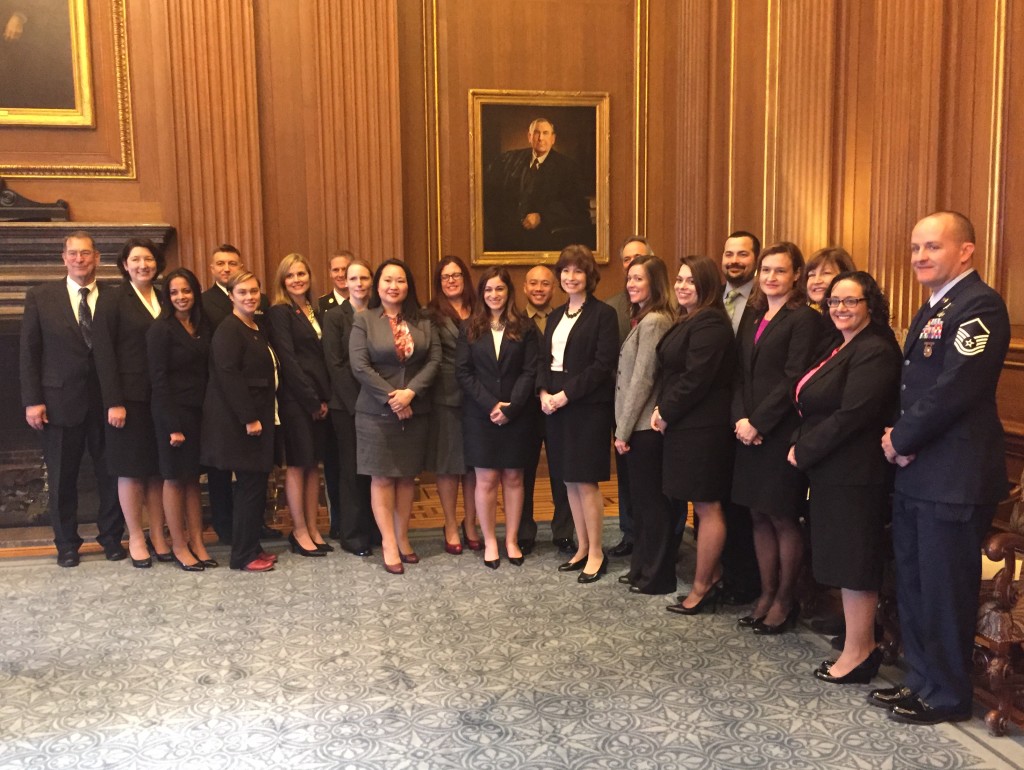 Judge Millett with military spouse attorneys being admitted to the Supreme Court Bar, and their friends & family.