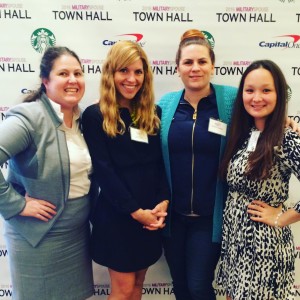 Rosemary Freitas Williams, recently appointed as Assistant Secretary for Public Affairs and Intergovernmental Affairs for VA, and Sue Hoppin, from National Military Spouse Network offered keynote speeches. Both are military spouses who provided sage advice about the importance of understanding Veteran’s Benefits and the challenges of transitioning into military retirement. Williams discussed challenges and opportunities from modernising the processes and culture of the VA. She conveyed that her ultimate goal is to “weave a network of support […] for Veterans of all eras.” Hoppin expressed the importance of building capacity, and the value of servant leadership in advocating for the military family community. A message that struck a chord with those MSJDN members in attendance was Hoppin’s declaration that “this is your village, and your village is top notch!” – at several points during the day’s proceedings, the grassroots advocacy and successes of MSJDN were highlighted as a great example of military spouses advocating for systemic change. 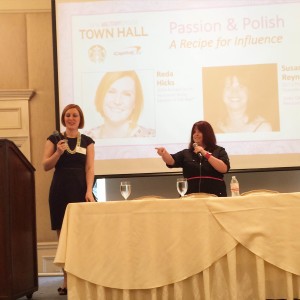 Military Spouse JD Network member Reda Hicks presented a panel on advocacy with “Bad Mother Advocate” Susan Reynolds highlighting the importance of authenticity and of building coalitions through relationship and strategic messaging. Their “Passion and Polish” panel demonstrated that owning your own passions, communication style, and network, military spouses can effect positive change for military families and communities. Hicks emphasized the importance of leveraging your strengths and connecting with others who have strengths in your areas of weakness. Suzie Schwartz had earlier reinforced the idea that change and improvement is more likely to be achieved when military spouses approach decision makers with possible solutions.

One of the day’s themes was the acknowledgement that although military spouses are more highly educated than the general population, this fact does not correlate to movements in the percentage of unemployed and underemployed military spouses. A panel featuring entrepreneurs, Lakesha Cole, owner of She Swank Too, Adrianna Domingos Lupher, founder of NextGenMilSpouse and MSB New Media, along with Cameron Cruse and Lisa Bradley, founders of R. Riveter, demonstrated that many entrepreneurial military spouses often start businesses that are unrelated to the field in which they were educated. They all advocated the use of SBA, state based resources, and V-Wise in starting new businesses, although each of these businesses themselves talked of the necessity of bootstrapping their startup costs and reinvesting all profits for at least two years before seeing a regular paycheck. 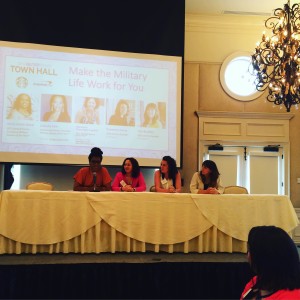 The final panel explored recent efforts by employers to promote military spouse employment and allow for more remote and flexible employment. The US Chamber of Commerce recently acquired InGear Career and, as part of the Hiring Our Heroes Program, has declared 2016 as the year of the Military Spouse. A number of “military spouse friendly” employers were featured during the Town Hall event, including Starbucks, Capitol One, Hilton Worldwide, and Combined Insurance. One area where improvement is still needed is representation by those employers who are looking for professionally licensed employees. Notably absent were any Law firms, or employers who highlighted their employment of attorneys. This week at the Annual Reception, MSJDN will award an employer who has demonstrated support for military spouse attorneys.

The Town Hall highlighted that there are areas in which progress has been made – the awareness of the impact of transition on military families, and the increasing professionalism with which military spouse organizations and military spouses are conducting themselves as they advocate within the public sphere. But it also highlighted the many areas where there is still much room for improvement. As much as each of the “military spouse friendly” employers spoke of wanting spouses to self-identify their military affiliation during the hiring process, it still remains that many military spouses have felt that such self-identification has served only to hinder their job-seeking. Finally, the rates of military spouse unemployment, including for military spouse employment, remain unacceptably high. Employers, including Government entities and private companies, are leaving significant knowledge capital on the table that impacts the resiliency of military families and the retention of service members – ultimately impacting national security.

May 11, 2016 at 9:00 am
From the Members, Uncategorized
military spouse of the year, MSOY
Johanna Thibault