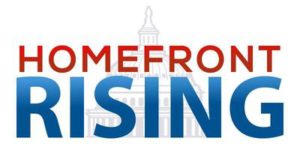 Homefront Rising returned to Washington, D.C. on June 17-18th, to co-host the Women’s Council in partnership with Veterans Campaign and the Atlantic Council. Homefront Rising is a non-partisan initiative founded by Mary Reding Smith, Lauren Wittenberg Weiner, and Donna Huneycutt that encourages and trains military spouses to speak up and get involved in the political process by serving in public office and positions of influence.

The Women’s Council was two days of education and training for female military spouses and veterans interested in serving in office. Attendee’s learned about the opportunities and challenges specific to military spouses and veterans pursuing civic and political leadership, how to lay the groundwork for future success, as well as the skills necessary to win. Leading political professionals, activists, academic researchers, and distinguished public servants were on hand for panels and breakout sessions designed to prepare attendees to return to their communities to serve in office.

MSJDN provided scholarships to two of its members. Here is a personal account from Alexia Peters, one of the scholarship recipients, of her experience at Homefront Rising in June:

I have thought about running for office off and on for the past few years but it always seemed like a pipe dream. After PCSing to the D.C. area with my husband, once again I found myself wondering about the political arena. How does it work? Who can I work for? Where can I gain experience? How do I set myself on the path to becoming an elected official? Through the Military Spouse Juris Doctor Network, I connected with Homefront Rising and was selected to attend their recent Veteran Campaign Women’s Symposium.

I expected to arrive at this program and sit in a darkened room with people on stage telling us how they became successful and how much money they raised. I was pleasantly surprised to enter an intimate, bright setting where attendees sat in a rectangle set up so as to see each other and the presenters at the same time. As the presentations began, the participants were educated on political offices and how to run for a seat. We were urged to participate and engage with the speakers in conversations and discussions on how to promote ourselves and excel at campaigning. I was blown away by the high level of speakers obtained, their industry knowledge and their commitment to train the next generation of elected officials.

I did not expect the reaction I had to this program. The ambition I’ve harbored underneath to run for office was brought to the surface and made to seem within reach. It was fueled not only by the presenters, but by the other attendees themselves. Our group became supportive of each other and each other attendee’s passion ignited my own. I left this convention with a vision of where I wanted to go and the tools on how to get there. I look forward to what my future holds and the future of my fellow participants.

Stay tuned for the next Homefront Rising event – a panel at Making the Right Moves in Washington, D.C. on October 21, 2016.