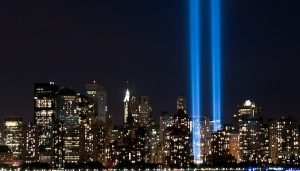 On 9/11, I was sitting in my 9th grade English class in Des Moines, Iowa. The majority of Americans can tell you exactly where they were, and what they were doing when they received the somber news. As we approached the fifteenth anniversary of the attacks on the twin towers, I could not help but recall an essay written five years ago for the tenth anniversary of 9/11 for Harper’s Magazine, David Rieff’s “After 9/11: The Limits of Remembrance.”[2]

Rieff posited that there is a “moral downside” to the concept of remembrance, and that there may be more of a cost than a benefit to the remembrance of the 9/11 national tragedy. Further, that there should be more of a focus on the possibility of forgetting in order to move forward as a society, instead of concentrating on the duty to remember:

“…We would do well to consider the possibility that if our societies were to expend even a fraction of the energy on forgetting that we now do on remembering, and if the option of forgetting were seen as at least as available as the duty of remembrance, then the peace that must come eventually might actually come sooner… Will it ever be possible for us to give up the memory of our wounds?”[3]

Rieff argued that memories die with the generation that experienced it, and that remembrance, whether conjuring positive or negative memories, will only exist as a “form of politics”: “…How many Americans actually remember the 1,177 American sailors killed on the U.S.S. Arizona that day…in the case of Pearl Harbor, we have gone not only past memory but past remembrance in the living sense…Knowing this, it is time to stop postponing the question of what collective memory of the kind that is being expressed in the tenth anniversary commemorations of 9/11 is actually good for, and what are its risks[?]”[4]

I am not convinced that there is any duty imposed on our nation to forget the “memory of our wounds”, or, frankly, that there is necessarily a moral downside to the remembrance of the 9/11 attacks. Certainly, with each passing year, there will be less and less Americans that actually recall the events of September 11, 2001, just like the generation that experienced Pearl Harbor has slowly decreased in number. But there is a moral responsibility to remember Pearl Harbor, just like there is to remember the 9/11 attacks, imposed on current and future generations of Americans. There is a reason that a Google search of “Pearl Harbor” creates approximately 18,300,000 hits, despite the Internet’s development only in the late 1990’s. Further, that while the phrase “We will never forget 9/11” generates approximately 1,750,000 hits, the phrase “We will always remember 9/11” generates more than 2,750,000 hits.

The well-known phrase “We will always remember 9/11” suggests a duty to remember in order to fulfill a moral commitment to the past. What is remembered about the 9/11 tragedy, and why our nation chooses to remember it, is also important in that it shapes how our memory of the attacks are remembered in the future. Additionally, that the “what” and “why” of this historical event has continued to impact our identity as a country. Our national identity cannot help but to have been molded to what it is now as a result of the past: European colonization, the American revolution, industrialization, world wars and the civil rights era have all affected what it means to identify ourselves as “American”.

Surely, then, the large scale feelings of solidarity experienced by the American people after the events of September 11, 2001, impacted our identity as a nation. It also seems that remembrance of the attacks is healthy in that the moral value of remembering the victims that suffered and the heroism demonstrated by military, law enforcement, firefighters, and citizens alike outweigh any pains in recalling the purpose behind the al-Qaeda terrorist attacks and subsequent War on Terror. Though we are memorializing the fifteen-year anniversary of 9/11, the concept of giving up or forgetting the “memory of our wounds” is difficult because forgetting disregards the past, and past events can’t be repressed or deleted from our memories, especially in the context of something that impacted our lives on a nationwide scale. Additionally, our post 9/11 America has already substantially changed, whether or not we choose to forget the tragic event: Consider the continued controversy over immigration and domestic spying policies; attitudes toward Muslim Americans (or hate crimes in general); economic repercussions on U.S. and world stock markets; and, certainly, the Global War on Terrorism’s impact on military family culture and resilience since 2001.[5]

However, I concede that the duty of remembrance is limited in that (1) we should not assume that remembering what happened can deter future bad events from happening; (2) remembrance cannot create closure, especially for the families of the victims; and (3) remembrance can quickly be politicized to the degree that the benefits of doing so is lost. Therefore, what makes the action of our remembrance of the 9/11 attacks “moral” is directly correlated with how we intend to remember that day, and how we choose to utilize that memory. In that vein, our remembrance of 9/11 fifteen years later reaffirms our respect for the victims that died, the heroism that occurred, and the recognition that post 9/11 America will never be the same.

This September 11, 2016, the fifteenth anniversary of the attacks on the World Trade Center, it is in good conscience of our duty to remember to contemplate a portion of the National September 11 Memorial’s mission statement: “Recognize the endurance of those who survived, the courage of those who risked their lives to save others, and the compassion of all who supported us in our darkest hours. May the lives remembered, the deeds recognized, and the spirit reawakened be eternal beacons, which reaffirm the respect for life, strengthen our resolve to preserve freedom, and inspire an end to hatred, ignorance and intolerance”.[6]

[1] Research for this article was taken from Ziya Meral, “A Duty to Remember? Politics and Morality of Remembering Past Atrocities”, 1 International Political Anthropology 5, 29-50 (2012) and Wilson Herrera, Ph.D., “Political Guilt, Forgiveness, and the Duty to Remember, State University of New York at Binghamton (2008).