You’ve just found out your Active Duty spouse is being transferred to a new location. You immediately begin the latest round of PCS preparations. You start drafting your timeline: when you’ll give notice of your move to your current employer, when to turn off the Internet service, when to schedule the movers, which weeks you’ll spend traveling to the new location, and when you’ll start sending out resumes and networking in the new location. But what if you could take this last task off your list? Maybe it’s time for a break? What if…

What if this time, instead of arriving in your new home “Unemployed,” you arrive “on Sabbatical?” Could a change in messaging make a difference in your (and your family’s) experience in your new home and help you develop your career? While a sabbatical is historically a formal system employees utilize for time off from a job to pursue study, hobbies, or travel with an employer’s blessing, career-minded professionals have recently begun to use the term to define a voluntary break from a career, without an intention to return to their original position. After speaking with military spouse attorneys, making the “sabbatical” approach successful for you is all in the messaging, properly utilizing the time off, preparing for the financial flexibility, and finally, planning ahead for re-entry into the workforce. 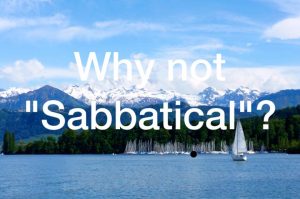 Messaging Your Time Off

For Annaliesse Nassiri, a Healthcare Executive currently in her final year of a two-year sabbatical, it was important to properly frame her sabbatical from the start.

“Externally, it was important for my network and future employers to know I was going into a temporary sabbatical to take advantage of an opportunity to make the most of living overseas; internally, it allowed a bridge into my new identity and took off some of the pressure to simply fill my time with activities.”

Through this approach, she was able to avoid feeling compelled to participate in activities and instead allowed herself the time to enjoy activities she wanted to do. She also added that it was easier on her ego to message that this phase in her career was merely temporary.

For attorney Alicia Cobb, her career break occurred after just a year in the professional world, so she did not message it as a sabbatical then. Her reasoning for her career break was deeply personal to a military spouse: she was about to have her first child and her husband was starting a one year, career-level school exactly one mile from their home. Once he completed his training, he would immediately be going back to a deployable unit for at least three years. Being a Marine infantry officer on the front lines translated into extremely dangerous deployments. In the event the worst happened, she wanted to enjoy this year with him home for them to both bond with the baby without the added stresses of her having a job.

“If something had happened to my husband and I had’cheated’ us out of some really great family time for the sake of a job, I’d never have forgiven myself.”

For a Sabbatical to be a success, Nassiri suggests defining a purpose and drafting a mission statement for the career break to ensure better utilization of this time off. Her goal was to spend time exploring a new country and culture with her family. She and her husband discussed their priorities, knowing that her husband would have fairly flexible hours and determining that they did not want her potential work schedule to prevent them from making the most of their time in Japan. The family embraced the time as their “window to travel” because their children are not yet constrained to school schedules.

Other approaches might include volunteer or part-time work or obtaining an advanced degree. Liesel Stanhope, a Navy veteran and attorney, provides pro bono services and works part time to stay active in the legal community, while allowing her time to spend with her family.

Candice McPhillips, an attorney currently on sabbatical in Okinawa after 14 years in the workforce, decided to take advantage of an overseas tour to pursue an LLM in tax law to further diversify her background. Her husband’s job does not allow for much time off, so finding something to do to enhance her marketability became a priority over family travel. She hopes the degree will increase her portability outside of litigation when she returns to the workforce. She explains, “I have an undergraduate business degree and enjoyed tax classes in law school so figured I could do more with a Tax LLM to supplement the litigation experience I already have.”

McPhillips embraced a career break years ago, during which time she threw herself full force into volunteer work for the local military community. The time helped her gain a new perspective, which integrated into her professional life (it is unusual to be faced with life-or-death decisions or deadlines at a corporate law firm). Her colleagues later told her they found her new attitude refreshing. By keeping up with former employers and mentors while on break on the west coast, she was able to quickly find employment upon her return to the workforce and the east coast. She recommends planning ahead for the loss of income, as financial stability during a break allows for greater opportunity for reflection on career motivation and work/life balance.

Establishing a healthy financial situation ahead of time will allow more flexibility and less stress during a sabbatical. For some, that means saving up in the period prior to taking leave, or preparing ahead of time by careful budgeting and living off of one spouses’ income, rather than two.

For many professionals, student loan obligations are a huge stressor. Sara Penn, an attorney who took a sabbatical several years ago, recommends having a good honest conversation about budget with your spouse prior to taking a sabbatical. “I wished I had had a more thorough budget talk with my husband instead of trying to downplay my loans and cover them myself, with no income.”

It is important to properly message a sabbatical as a positive piece of your career history. Obviously, you will want to leave an employer on good terms. When giving your notice, present them with a well-defined sabbatical plan. Keep your network informed of your progress and accomplishments, via social media, e-mail, or in person. Keep a journal or update your resume as you experience activities, volunteer, or go on new adventures, so you can easily reference talking points in future interviews.

Attorney Natalie Washington found that her sabbatical allowed her time to determine and mold her future career path. She took almost two years off when her husband’s career relocated them to Kansas. She picked up some sporadic document review work during the time. But, surprisingly, it was the time she spent as a Family Readiness Group leader for her husband’s company (where she earned two Presidents Volunteer Service Awards and the Fort Riley Lady Victory Award) that she utilized the most in her transition back to full-time employment. “I applied for a non-traditional job as a research analyst with the legislature. They needed someone with knowledge of military and veterans to staff that committee and answer the requests for information. So, that [volunteer experience] got me the job.” After two years at that role, she was able to again highlight the benefits of her sabbatical when applying for an attorney position at a traditional law firm. In the interview she emphasized how frequent moves had made her resilient and accustomed to transition. Washington adds,

“The time off allowed me to really decide what I wanted so I could stay in the position long term.”

Future employers may find your experience sparks common ground or highlights common interests within the workplace. Washington found sharing her military volunteer experience with a firm that had military connections helped land her a post-sabbatical job. “I found out the firm’s COO was an Army brat; one of the partner’s sons is military; and one of the attorneys is also a JAG for the Air National Guard.”

Cobb ended up returning to her former employer after her seven-year break. She said leaving on good terms, remaining in contact, and volunteering her time in a legal services office factored into a successful reentry into the workforce. “They remembered my leaving at eight months pregnant and subsequently moving. I still had to go through the formal interview process to get my job back, and I emphasized my volunteer time with legal services, but the time off didn’t hurt my chances at being rehired there,” she said.

When faced with an upcoming transition, it can be stressful to consider the long-term effects of taking time off. Attorney Sara Penn shares, “Looking back, I wish I had a mentor to put into perspective how brief my time off was in the long scheme of my work history.”

Attorney Amanda Downs offered employers a succinct explanation for her break. “I was asked from several employers why I took the break. I explained there was a family situation and each employer completely understood.” She ultimately found a part time remote position through MSJDN, which she loves. “My boss had no issues that I took a year off of work to raise my daughter and move. I work part time, but have been really lucky to be able to work at home and raise my daughter, especially while my husband does reserves and his civilian job. I feel confident that [with the next move], I’ll have this great experience to show for it and won’t have to explain as much about my sabbatical as I had originally thought I would.”

Jim Koch, founder of Sam Adams explained on NPR’s How I Built This that staying in his comfortable consulting job was too risky:

It may seem terrifying to “voluntarily” stop working for a period. But a sabbatical offers an opportunity to take a step back, reassess your professional goals and track, and build up energy, purpose, and motivation for a successful next step in your career. Timing a sabbatical with a mandatory relocation might just be the perfect opportunity to “safely” quit a job before burning out and burning bridges.