The visit went very well! Rep. Wittenberg (D-Dist. 27) and Rep. Maturen (R-Dist. 63), who sponsored the bills, were present, along with Michigan Supreme Court Justice Zahra. We took photos with Gov. Snyder, and I received a copy of the bills and a pen that was used by Gov. Snyder to sign the bills. The Michigan Senate passed the bills unanimously, and there was only a single dissenting vote (an attorney, no less!) from the House chamber. 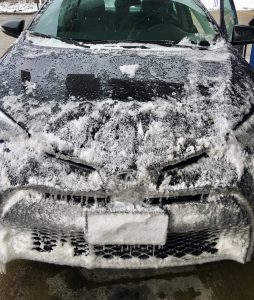 I flew in to Chicago from Denver pre-Storm Stella, so I didn’t land at ORD until midnight. Chicago received some serious snow, to the point where my rental Toyota Corolla front sensors kept giving me error messages because the whole face and back of the car were completely covered in ice.

The Chicago freeways were completely ‘red’ on GoogleMaps, so I took alternate routes through the southeastern Chicago suburbs, to get through Indiana very briefly (where the snow was moderate and not as terrible) and eventually into Michigan (blue skies, snow on the ground but completely removed from the roads). 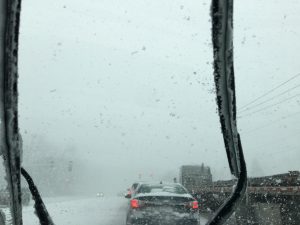 It was my first visit to the Great Lakes State. I actually have no connection with Michigan other than an uncle who attended the University of Michigan. Thus, I had a moderate panic attack upon realizing that Lansing, like Detroit, operates in Eastern time, not Central time like Chicago. My Fitbit was on Denver time (Mountain), my rental Toyota was on Chicago time (Central) and much to my surprise my MacBook and iPhone reflected Eastern time once I entered Lansing (but it wasn’t until an hour into my arrival in Lansing that I realized this!)

Fortunately, I was able to find the Governor’s building, which was very close to the building that housed legislative offices, including Rep. Wittenberg’s office. After passing through security, we briefly waited for the Governor before meeting him and taking part in the ceremonial bill signing. I briefly spoke to Justice Zahra, who had been a supporter of the bill since the beginning. I had been informed by legislative staff that Justice Zahra previously served on the Michigan Board of Law Examiners. It is my understanding that this was Justice Zahra’s first bill signing as well!

Upon meeting Gov. Snyder, I introduced myself as a representative of MSJDN, briefly explained our mission and the purpose of our state rule change program, and thanked him for his support. Afterwards, I received a tour of the Michigan legislative office building from Rep. Wittenberg. The building was constructed in the late 90’s and was specifically designed to ensure that each legislative office had a view of the State Capitol building (so no fighting over office locations!).  I also learned that the Michigan legislature is unique because, as one of the most populated states in the U.S., the legislature is full-time. Thus, the Michigan legislature has term limits.  Often it is the case that state legislatures are part-time, but have no term limits. I took a photo of the view of the State Capitol building from Rep. Wittenberg’s office! 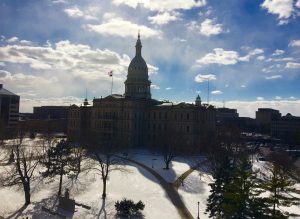 To recap how HBs 5288 and 5289 became law, HBs 5288 and 5289 went through the House chamber first (hence the “HB” name), filtering through the House Veterans’ committee. On the Senate side, the bills went through the Judiciary committee. Fellow MSJDN Member Angela Allen testified in committee on behalf of MSJDN in support of the rule! Committee amendments were adopted, but they were noncontroversial, involving language that I consider to be standard in the MSJDN model rule for rule change efforts.  As a former Kansas nonpartisan legislative attorney, I was very impressed about how quickly the bills passed through both chambers to ultimately land on Gov. Snyder’s desk! Rep. Wittenberg, Rep. Maturen, and I discussed how these ‘common sense’ bills were supported by both sides of the aisle and the fact that the bills would absolutely help active duty Coast Guard and Air Force military families stationed in Michigan.