Amy Waller Apostol is a military spouse attorney who has successfully navigated the demands of military life while still maintaining a meaningful legal career.  A mother of three and a wife to a Navy JAG reservist, Amy worked as a supervisory attorney advisor for the Department of Defense from 2011 to 2015 and now serves as the lead counsel for the National Background Investigations Bureau for the United States Office of Personnel Management (OPM).  Due to her exemplary service, Amy also received the OPM Director’s Award in May this year alongside fellow MSJDNer Kate Hudson! 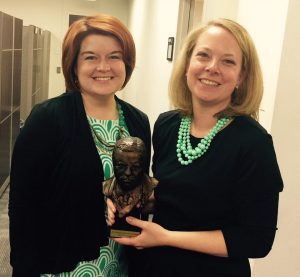 During her time as an attorney with the Department of Defense, Amy led teams in federal Guantanamo Bay habeas corpus litigation. In the first year of her career at OPM, Amy defended the agency in complex cybersecurity litigation and provided advice on data breach incident response activities, data privacy compliance, IT policy, and oversight activities.  Since late 2016, Amy has served as the lead counsel for the National Background Investigations Bureau. In this role she provides comprehensive legal advice to a semi-autonomous bureau, which has approximately 9,000 federal and contract employees, with the mission to perform effective and efficient background investigations for the federal government.

Amy became a member of MSJDN shortly after the organization was formed: “I found out about MSJDN while my husband was deployed to Afghanistan in 2011-2012.  The timing of the discovery of this group could not have been better.  I was not located near the unit my husband supported and consequently had little to no support from the military community as a reservist spouse of a deployed individual, so it was incredible to find that support in a different place.  As I read the Facebook posts, I saw how strong and resilient these other spouses were and how they were going through experiences so much harder than mine.  It helped put things in perspective during a tough time.  Subsequently, the organization has not only been a great place to make valued friendships, but has been a great way to network in the legal field.  I’ve had the opportunity to work with potential employers, job candidates, and esteemed professionals.  Making connections through MSJDN, both personal and professional, has had such an impact on my life.”

She later served on the MSJDN Board as the Homefront to Hired Chair where she served as a liaison working to develop partnerships by engaging with potential military spouse attorney employers.  Amy focused on the employer’s needs and connecting them with viable candidates from the MSJDN network.  As a result of increasing the profile of MSJDN and building relationships, one of the success stories of the Homefront to Hired initiative was a military spouse attorney being employed by Prudential.

I asked Amy what advice she would give to other military spouse attorneys who are trying to maintain a legal career despite the challenges of military life: “First, if you want to maintain a legal career (even if not traditional), stay in the game in some form or fashion.  Interviewers have commented on how my resume reflects a certain level of determination or tenacity in maintaining some foothold on the legal profession.”

Amy has consistently made and capitalized on opportunities throughout her career.  Prior to working for the Department of Defense, she litigated criminal and immigration cases, worked on a contract basis for other lawyers doing behind-the-scenes civil litigation work and wrote web content for legal aid websites.  Gaining experience bit by bit and in many practice areas helped her to work efficiently and have the flexibility and comfort with working on new subjects and in new settings.   She believes that her unconventional work experience has been a key to her success in her federal career.

Beyond maintaining a presence in the legal world, Amy stressed the importance of networking. “Not only can networking help you land a job, but it can provide a great personal connection through mentoring and discussion to help you refine your career goals, explore new ideas, and make a rewarding personal connection with like-minded individuals.”  She advised that bar associations, practice area-focused groups, and even social groups are all wonderful ways to broaden your circle and find opportunities.  Shedding a positive light on the demands of being a military spouse, she commented, “The good thing about moving from place to place or job to job is the chance to build an ever-widening base of colleagues and supporters nationwide – you never know when that network will come in handy!  In addition, take time to help others and build them up in their career.  I’ve had the good fortune to support a few MSJDN members in their job searches, and it has been tremendously rewarding to have some small part in someone else’s success.”

The day after I spoke with Amy on the phone she sent me a job listing she thought might interest me.  I was so touched by her thoughtfulness.  Thank you Amy for proving that there is not one path to success and that actively participating in your community and providing support to others is key!