On June 14th, Hiring Our Heroes (HOH) hosted the Military Spouse Employment Summit to focus the conversation on what it means to be a dual-income military family in the 21st century. The half-day event unveiled the results of the 2017 HOH Military Spouse Survey, identified best practices in talent management for recruiting and retaining military spouses, highlighted standout military spouse professionals and entrepreneurs, and set the stage for a renewed emphasis on removing barriers to military spouse employment as a national security imperative. 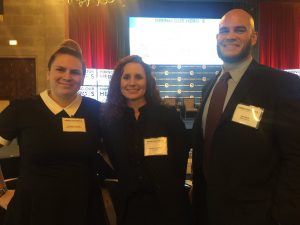 The morning started off with a welcome from Dr. Jill Biden, who previously worked with the Joining Forces initiative to support career-minded military spouses.  She noted that military spouses are seven times as likely as their counterparts to be unemployed and typically earn about one-half the income of their civilian counterparts, despite having higher than average education levels.  Dr. Biden shared the story of military spouse attorney Jennifer Vercellone who, after five bar admissions and nine military moves, was able to find meaningful employment in a remote position with Prudential through MSJDN’s Homefront to Hired initiative (you can view her story here at the 15 minute mark). “Every military spouse should have the chance to find a job that fits their skills, passions, and needs,” said Dr. Biden.

Dr. Adam Jones then shared some hard facts on military spouse employment.  HOH surveyed 1,273 spouses of active duty military service members and recent veterans to discover the challenges they faced and the effects of military spouse unemployment and underemployment on military recruitment and retention. He highlighted that fact that military spouses live in a recession, despite the general well-being of our economy.  Other key findings included:

The remainder of the summit featured panels with distinguished and knowledgeable speakers highlighting areas of concern and identifying solutions for tackling the issue of military spouse unemployment.  Eddy Mentzer, Associate Director in the Department of Defense’s Office of Family Readiness Policy, issued a call to action for employers to not only hire military spouses, but implement policies to retain military spouse employees and overcome the challenges associated with a mobile lifestyle.  A later panel, moderated by Meg O’Grady of Kaplan University and including military talent specialist Teresa Lepow from Amazon, focused on utilizing technology to create portable opportunities for military spouses.  Michael Kelly, Assistant Vice President of Military Advocacy with USAA, shared his organization’s best practices and referenced USAA’s collaboration with MSJDN in support of military spouse attorney hiring.

Presidential advisor Kellyanne Conway also addressed attendees, explaining that military spouse employment problems were under active examination by the administration.  Among the problems being explored are regulations regarding professional licensing, an issue familiar to military spouses in the legal profession.  Conway said military families shouldn’t have to choose between paying a $500 fee for a professional license and buying groceries or other necessities. 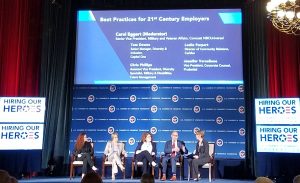 The day closed with a panel exploring “Best Practices for 21st Century Employers,” featuring private sector leaders, including MSJDN member Jennifer Vercellone, Vice President, Corporate Counsel with Prudential. Jennifer shared her personal experiences as a military spouse attorney and explained how, despite gaps on the resumé, military spouses bring the same skills as our counterparts, along with the intangible skills like resiliency and resourcefulness gained through the military lifestyle.  She praised Prudential for their preparation and support of her role as a fully remote employee and described how supportive employers in turn engender loyalty and commitment from military spouses.  With the current trend of frequent career changes, employers who make an effort to engage and retain military spouses will find long-term employees eager to maintain meaningful and portable careers.

You can view a video of the summit here and the full survey results are available here.

MSJDN is committed to continuing the discussion and education aimed at removing barriers to military spouse employment. Many thanks to HOH for a fantastic event and their dedicated efforts on this issue!