Bobbie Collins has spent years “paying it forward” by providing pro bono legal work for her local military spouse club on Kirtland Air Force Base in Albuquerque, New Mexico.  The Kirtland Spouses’ Welfare Club recently honored her work by naming a new “Ms. Bobbie Collins Spouse Scholarship” after her to be awarded to military spouses pursuing education.  This year the new scholarship was awarded to Central New Mexico Community College Health Information Technologies student and military spouse Jessica Rodriguez.  The annual scholarship is funded by proceeds raised by the thrift shop run by the Kirtland Spouses’ Welfare Club, which is a Section 501(c)(3) non-profit private organization.

Collins’ own pursuit of continuing education inspires the new scholarship.  In 2016, Collins earned her Master of Laws in Taxation (LL.M.) through the online LL.M. program at the University of Denver Sturm College of Law Graduate Tax Program.  She originally was accepted into the LL.M. program as a 3L at the University of Denver, but declined admission at that time because she was expecting her second child and commuting one hour each way to school from Peterson Air Force Base.  Upon graduating from law school in 2010, she worked for the El Paso County District Attorney’s Office for approximately two years and then began working for Holland & Hart LLP in Colorado Springs in their real estate and litigation practice groups.

After one year at Holla 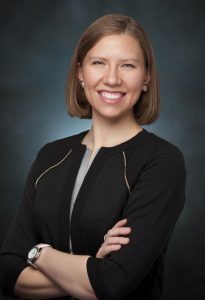 nd & Hart, the Collins family PCS’d to Albuquerque and she ended up taking off from work for one year in part due to her third child arriving four months early.  During that challenging time, and with the support and encouragement of her husband, Collins took and successfully passed the New Mexico Bar while her son was in the middle of a five month NICU stay.  Then, after her son was discharged on oxygen, she was trying to figure out how to stay active in the law and fortuitously got reconnected to the University of Denver’s Tax LL.M. program which had recently begun being offered online.  Within a few month of starting the program, Collins’ husband separated from active duty during a Reduction in Force, and Collins returned to work – first with Butt Thornton & Baehr PC, and then with her current firm, Lewis Roca Rothgerber Christie LLP, where she has now worked for a year and a half.  She now practices tax law as well as complex civil litigation and real estate and enjoys the atmosphere of a small office but with the resources of a large firm with nearly 300 attorneys across ten offices in five states. Collins thus nearly spent her entire time in the three year online LL.M. program working full time and raising three children.  She was able to watch live and recorded classes online, completed additional homework assignments, and had exams proctored by the University of New Mexico.  Placing great value on investing in education, Collins’ husband also completed a Master’s in Business Administration during this same timeframe while he was working full time; both Collins and her husband enjoyed quiet evenings studying together after putting their children to bed and discussing (or sometimes joking about) their professors and respective studies.

Collins has supported the Kirtland Spouses’ Welfare Club and related Kirtland Spouses’ Social Club for roughly three years by providing legal advice on a variety of non-profit governance issues and acting as their general counsel on several matters.  Collins met the prior president of the Kirtland Spouses’ Clubs through a post on her neighborhood association Facebook page inquiring about a tax issue.  She later found out the tax issue was related to the spouses’ clubs on base.  One question led to another, and she began working with them on a variety of other issues.  Collins recently finished helping the Club with a major bylaw revision. She is also thankful for the support of her firm’s commitment to providing pro bono services and her husband’s understanding of her desire to make a difference in the military community.

As Collins explains, “Military spouse organizations are interesting entities because many spouses who sit on organization boards have been military spouses for many years, but have never had the opportunity to receive formal legal advice or training in nonprofit governance and operating tax exempt entities.  I tell them these are real issues.”  For instance, substantial complexity exists in a military spouses’ club’s interactions with the rules and regulations of tax law, military installation orders, and state business formation law.

Collins finds it particularly interesting that “most of the spouses’ clubs are run as unincorporated associations under state law but also seek Section 501(c)(3) status, while simultaneously operating as private organizations on military bases subject to military branch restrictions on their actions.  The federal, state, and military branch compliance issues are complex and all of those issues have to be weighed together while the organizations deal with substantial turnover in their leadership on a yearly basis as military spouse leaders PCS.”  For example, when Collins originally volunteered to assist the Kirtland Spouses’ Clubs, she was dealing with issues that were brought up by one leadership board, but had to refer to the documentation of the issue from four or five boards ago; it is always challenging to deal with ongoing and new issues as the boards change yearly.

Collins is again actively “paying it forward” with her knowledge of legal issues related to military spouse organizations by working with the MSJDN Foundation to help set up the Pro Bono Committee’s newly formed “Military Spouse Club Project Team.”  The project team consists of around ten other military spouse attorneys and will create informational sheets to support military spouse organizations with compliance at the state, federal, and installation levels, and also on operational issues.  Eventually the project team hopes to establish a pro bono panel and to put on a webinar.

The new scholarship named after Bobbie Collins highlights her success in overcoming substantial family challenges to persevere not only with her own career and continuing education earning her LL.M. but also in dedicating significant time to assisting her military spouse club.  Her actions underscore the impact military spouse attorneys can make on a local and national level.