As an ABA affiliated organization, the National Conference of Women’s Bar Associations (NCWBA) presents a yearly Women’s Bar Leadership Summit (the “Summit”) during the ABA’s Annual Meeting.  The 2017 Summit, Succeeding with Strength and Savvy was presented in New York City at Thompson Reuters in Times Square. 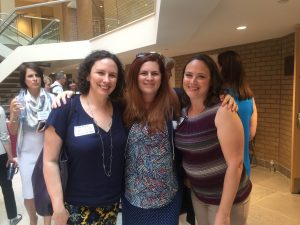 MSJDN leaders at the NCWBA Summit

The Summit events kicked-off Thursday evening at Fordham Law School with a reception and an exclusive showing of Balancing the Scales, a documentary by Sharon Rowen highlighting the challenges women lawyers face in all aspects of the profession.  Notably, Ms. Rowen interviewed Hon. Ruth Bader Ginsburg and Gloria Allred in the film, each giving a candid discussion of their personal experiences leading up to their positions as leaders in the profession.  An interactive panel followed consisting of Sharon Rowen and Aracely Muñoz, moderated by Charlotte Rushton, further discussing the status of women in the legal profession and overall themes of parity, diversity, and inclusion.  It was interesting to see and hear the differing perspectives of being a woman in the law from decades ago to today.

As its annual event, the NCWBA also conducts its Annual Meeting and Elections at the Summit. The NCWBA welcomed in its new Officers and Directors for 2017-2018 with the installation ceremony and the oath of office administered by Hon. Jenny Rivera, Associate Judge of the New York State Court of Appeals.

Next, the Summit’s morning program began with “Women in the White House: A Conversation with Kathy and Kim.”  Kathryn Ruemmler and Kimberley Harris, respectively the former Chief Counsel and the Deputy Chief Counsel to President Barack Obama, provided a meaningful look into their time at the White House through a slide show of their own photographs.  In equal measure, Ms. Ruemmler and Ms. Harris offered both insightful perspectives and relatability.  Most notably, we learned that by giving vocal credit to each other, women can counteract being drowned out or not receiving any credit at all.

Following the conversation panel came “Career Tools: Integrating Mentoring, Sponsorship, Coaching, and Networking to Maximum Effect.”  Participating panelists were Lauren Stiller Rikleen (Rikleen Institute for Strategic Leadership), Joseph West (Duane Morris), and Morgan Fraser Mouchette (Blank Rome LLP).  The panel discussed the importance of each element at various stages of the legal career.  In the ever diversifying career field, however, it is important to consider that a person’s biggest champion or best student, quite possibly looks nothing like you.   The panelist each encouraged the audience members to allow for diversity in all aspects of navigating this process.

Equally, the Keynote Speaker for the luncheon, Roberta A. Kaplan, counsel for Edith Windsor in the landmark Supreme Court Case, addressed issues of diversity and gender parity in the legal profession.  Ms. Kaplan described challenges she faced while forging her own path to success and how she harnessed her tenacity to be an effective litigator.  Ms. Kaplan recently opened a law firm, Kaplan & Company, LLP, which strives to focus on flexibility and ingenuity in its client representation.

For its final Summit Panel, the NCWBA presented “Inspiring and Supporting ‘Guys Overcoming Obstacles to Diversity: GOOD Guys 101: Engaging Men in Our Success.”  Sheryl Axelrod moderated the panel and discussed the benefits of diversity and inclusion in the modern day law practice.  Panelist Michael J. Commorata of Accenture, discussed how he uses his position as the Senior Director of Legal Services to encourage his outside counsel to specifically give projects to women in their law firms.  Likewise, Richard Meade of Prudential and Nate Saint-Victor of Morgan Stanley, discussed how giving women in the legal profession is not only the right thing to do, but also the profitable thing to do.

Finally, to end the day after such great programming, the Summit attendees participated in a mini hackathon to brainstorm and develop programs and initiatives.  Each table created a program to try to innovate the way in which the legal profession deals with gender parity issues.  For example, my table’s concept focused on a social/networking aspect tied to happy hour with monthly diversity discussion themes as a way to keep the diversity conversation moving forward, but at the same time at a fun event.  The mini hackathon was a way to pull together all of the themes of the day into a practical application.

The programming at the 2017 Women’s Bar Leadership Summit did not disappoint and at parts left me awestruck.  Using dynamic speakers with unique perspectives to discuss the difficult topics on gender parity made this year’s Summit an enormous success.  I left the Summit eagerly looking forward to the future and grateful to be a part of an innovative organization like MSJDN!