With apologies to our awesome MSJDN Communications team, I’m writing this month’s letter the day before the newsletter goes out because I knew I wouldn’t want to write anything until after the Making the Right Moves conference was over. I’m still coming down off of the excitement of the past few days full of familiar names from the MSJDN Facebook group, new faces and connections, useful information for building our career paths, and lots of laughs! I lost count of how many people came up to tell me they were so relieved when they found MSJDN and discovered they were no longer along on their journey as a J.D. and the spouse of a servicemember. The power of this organization to connect us is incredible. But what inspired me even more than knowing how much this organization means to our members was hearing about the different ways military spouse attorneys serve our communities. 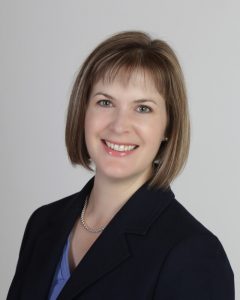 The night before the conference, I received an email from Heather Strickland, an adoption attorney in Tucson. Heather reached out to let me know her congressional representative was interested in learning more about the challenges faced by professional military spouses.  I also learned that the Congressional Coalition on Adoption Institute (CCAI) had named Heather as a 2017 recipient of an Angels in Adoption award. In 2016 alone, Strickland and her staff handled the adoptions of nearly 600 children through the foster care system. This was in addition to her representation of brave women choosing to place their children for adoption and adoptive parents completing private adoptions in Arizona.  Heather and her family have a long history of dedicated service to their community. Her husband, Major Kevin Maskell, served 15 years on active duty in the United States Air Force. Maskell left active duty this summer and joined the Arizona Air National Guard to ensure the family remained in Tucson for the sake of Strickland’s career and the local children and families she serves. Heather was honored by Rep. Martha McSally for her contributions to adoption and child welfare at the CCAI 2017 Luncheon on September 26th in Washington, D.C.

The next day, it was my honor to present the 2017 MSJDN Exceptional Service Award to Angela Allen. Angela is a partner in Jenner & Block’s Chicago office, where she coordinates a Military Affinity Group. In addition to her bankruptcy and restructuring practice, Angela dedicates substantial pro bono time and energy to legal issues involving the military. Jenner & Block consistently is rated a top pro bono firm, and the leadership there had always encouraged her own pro bono efforts, often in support of military families. Angela serves as MSJDN’s Illinois State Director and successfully lobbied the Illinois Supreme Court to adopt a military spouse attorney licensing rule in 2013. Angela still acts as a contact for incoming Illinois spouses and accepts pro-bono requests from MSJDN’s pro bono program for the Chicago area.  More recently, Angela agreed to step into the position of State Director for Michigan and led the charge to secure military attorney legislation in the state earlier this year, including driving through a blizzard to testify to a Michigan state senate committee! Angela is also active in the Chicago chapter of the Turnaround Management Association and currently serves on the Board of Directors.  Angela was unable to attend Making the Right Moves, but sent a message for her fellow military spouse attorneys.

I was also honored to present the 2017 MSJDN Volunteer Service Award to Bobbie Collins. Bobbie is an associate with Lewis Roca Rothgerber Christie in Albuquerque New Mexico, focusing on complex civil litigation, real estate, and taxation law. She maintains a New Mexico Real Estate Associate Broker’s license and has as LL.M. in Taxation. During law school, Bobbie clerked in the Fourth Judicial District, Colorado and for the Peterson Air Force Base Judge Advocate’s Office. Prior to private practice, Bobbie was a Deputy District Attorney in Colorado Springs, Colorado where she tried misdemeanor and felony jury trials.  But it’s Bobbie’s 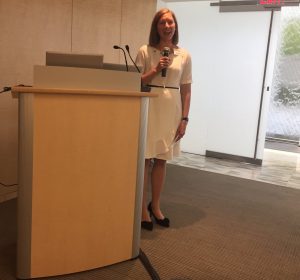 volunteer service that we celebrated with this year’s award. Bobbie volunteers with the MSJDN State Licensing Committee, working on the efforts to enact a rule change in New Mexico.  She has also taken the initiative to work with the Pro Bono Committee to stand up a Military Spouse Club Project Team to provide military spouse groups guidance on formation and governance issues. Additionally, she serves as Pro Bono General Counsel to the Kirtland Spouses Club, is a member of the Board of Directors for the New Mexico Women’s Bar Association, and recently had a scholarship named in honor of her volunteer work. Bobbie embodies the spirit of MSJDN’s mission to serve military families and improve our communities through our legal abilities. She used her time at the podium to challenge attendees to find ways to use our legal skills to give back to our communities, including through MSJDN programs.

In the spirit of Bobbie’s challenge, I hope you will mark your calendar for this year’s National Pro Bono Celebration, running from October 22-28 and focused this year on serving homeless youth.  MSJDN also has options for pro bono service. Through a partnership with the Tragedy Assistance Program for Survivors (TAPS), our Justice for Military Families (JMF) volunteers serve the military community every day by helping Gold Star families and survivors connect with resources and representation for their legal needs.  The Military Spouse Club Project team is working to provide formation and governance advice to military spouse groups around the globe. Join an existing project or put together a proposal for a new one! Pro Bono Director Trici Petek can be reached at jmf@probono.org.

Thank you, MSJDN members, for your passion for this organization and your service to our military and legal communities. Your volunteerism and service in support of those in need, despite your own challenges, are an endless source of inspiration!