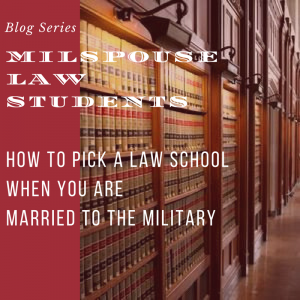 A week after I married my husband, I moved out of our sunny apartment into a tiny basement apartment about three hours away from him. This was not the result of any drama; this is not that sort of article. This move had been planned for months. I was going to law school.

I met my husband while I was in the U.S. Navy. He stayed in and I got out. I knew I wanted to go to law school, but how do you choose a law school when you don’t know where your spouse is going to be during the next three years? Or if we are being honest, for the next fifteen years? Since I graduated from law school in 2011, we have moved three times and we are getting ready for a fourth move. I like to think this is about average for military families. However, to civilians, especially those in the legal community, this is an unfathomable amount of moving. When I sought advice from the career office at my university and other attorneys, they said to go to the best law school I could afford in the location I wanted to practice.

I informally polled military spouse attorneys on what they considered or should have considered when choosing a law school. Cost was the number one reply. This is not surprising to me at all. One of the hardest parts of being a military spouse is getting and keeping a job. If you don’t have a job then it becomes a lot harder to pay back any loans you take out to cover the cost of law school. So keeping costs down is very important to any law student, but especially military spouses.

How do you keep costs down? Which schools will give you scholarships or in-state tuition? How can you keep living expenses down? For me, moving away from my husband a week after our wedding kept costs down because it was a location that my husband could move to during my 2L year. And to be honest most of my 1L year was spent in the library. It was probably good for my grades that all I was going home to was a cold, dark apartment.

The next biggest factor in choosing a law school for most military spouses was employability. Basically how easy will it be to get a job after you graduate? There are a lot of things that go into this judgment. First, what is the school’s bar passage rate? If you can’t pass the bar it is going to be hard to get a job. Second, what kind of name recognition and alumni network does the school have? Unless you are planning to live separately from your spouse, you probably will not be staying in the same region as your law school. It is hugely helpful in finding a job when people recognize your school name and even better when there are active alumni in the area with whom you can network. School rankings are also important, and if you are interested in a certain area of law, the ranking of a specific program (like tax law) could be very important.

One of the responses to my informal poll was that “[choosing a law school] was a balancing act of getting the highest scholarship etc. with going to a school that will help you get a job in the future.” This is good advice for anyone choosing a law school, but there are uncertainties that make this balancing act a little harder for military spouses. After applying to over 20 law schools, I ended up being torn between a relatively new law school that was very highly thought of in environmental law circles, but otherwise lower ranked, and a nationally recognized school with good rankings. The lower ranked school offered me a very good scholarship, but in the end I chose the higher ranked school. I have no regrets. While I am still very interested in environmental law, I have not gotten a job in that field and I am not sure if I ever will. Everywhere I have lived people have recognized my law school, and that has helped me get a foot in the door to many interviews.

Hopefully you are still excited about going to law school. And you should be! I really enjoyed law school. After doing all of this analysis, I believe wholeheartedly that you should pick a law school you like. You are going to spend a lot of time there and you probably will end up with some student loans that you will be repaying for years. So it needs to be worth it.