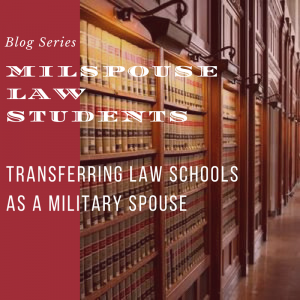 Being married to a member of the military comes with certain challenges and considerations. When you start law school, you know you are signing up for at least a three-year commitment. Given that most military families move every two to three years, the question of whether to transfer to a new law school may arise.

I started law school living 3,000 miles away from my husband. We knew he would be relocating before I would graduate, but we did not know where he would end up, so I opted to attend law school near my family. This allowed us to keep our living expenses down, and it gave me the flexibility to either complete law school there or transfer when we found out where he would be stationed.

After my first year of law school, my husband received notice of his new duty location. I had to decide whether I would stay at my current school and continue to live apart from my husband or transfer to a new school near his next place of duty. At this point, the most important consideration for me was the number of credits that the new school would accept. Thankfully, I was only one year into school, so all of my credits would transfer. I started looking at the schools in the area and decided that I would try to transfer. Before submitting any applications, however, I had to wait for my husband’s official orders to be processed because I was trying to avoid any unnecessary application fees, and until those orders came, everything could change.

By the time my husband finally received orders, I had already started a new semester but would still be safe on transfer credits. However, now I was completing applications while keeping up with my coursework. My husband was only given about 30 days to report to his new duty station, and since we were not sure if one of the new schools would accept me, we had to figure out our living situation. For us, it made the most sense for him to get a small efficiency off base until we found out if I would be moving.

I received an acceptance letter approximately three weeks before finals. While exciting, this also added significant pressure. In addition to trying to prepare for my exams, I was trying to pack up as much as I could in anticipation of the move. After completing my exams, I had two weeks to finish packing, move, attend orientation at the new school, get all of my books, complete any upcoming course assignments, and familiarize myself with the new city.

Once the new semester began, I started looking for apartments in my very limited downtime. My husband was doing quite a bit of traveling for work so the apartment hunting fell on me. After a couple of months of weekend visits to different apartments, I finally found a place that was suitable for our needs. Then, we had to move again.

The whole experience was a whirlwind, but all in all, it went fairly smoothly.  That being said, there are a couple of additional considerations that I think are worth noting. First is the timing of a transfer. Not only are transfer credits important to consider, but you should also look into deadlines for joining any extracurriculars in which you may be interested. In my case, I had hoped to participate in law review, but due to the timing of my transfer, I was unable to tryout. The school I was leaving was holding its write-on competition precisely at the time I was accepted to the new school, and by the time I moved, I had missed the write-on competition at the new school.

Another factor to consider is that transferring can have a greater effect on your class ranking and GPA. When I transferred, the grades I earned at my prior school did not transfer, only the credits transferred. Since I was working with fewer credits to average my grades against, one slightly lower grade had a greater impact on my GPA than my fellow classmates who had started at that school. This, in turn, also affects class ranking.

In hindsight, I wish I had given these aspects more thought, although I am not sure it would have ultimately changed my decision to transfer. Even though I was unable to participate in law review and my class ranking at the time of graduation was a little lower, my new school was ranked higher than my previous one, it offered a greater variety of courses, and, of course, I was with my husband.

Transferring schools was a lot of work and can be stressful, especially with the uncertainties that come with military moves, but it is possible. There are certainly pros and cons to transferring law schools; just be sure to weigh your options and make the decision that is right for you.