MSJDN is excited to announce that the 2018 Professional Excellence Award will be presented to military spouse attorney Cheryl Mason at the Annual Reception on May 17th.

Cheryl, known to her colleagues as Cheri, is an experienced attorney and leader, the spouse of an Air Force veteran, the daughter of a World War II Navy veteran, and as of 2017, the Senate-confirmed Chairman of the Board of Veterans’ Appeals (BVA) within the Department of Veterans Affairs. Cheri has met the challenges faced by military spouse attorneys, excelled at every level of the profession, and now leads approximately 1,000 employees and the administrative tribunal that adjudicates veterans’ benefits. She is the first woman to serve as the BVA Chairman, and the first military spouse as well.

Cheri previously served as the Principal Deputy Vice Chairman at BVA. She started her career at BVA in 1990, while her husband was still on active duty. After working there for four years, her husband received orders to report to Germany. Like so many military spouses who came before and after her, she put her professional career on hold and moved her family overseas. Wanting to work, but unable to find employment as an attorney, she accepted a position as an office manager. Upon returning to the U.S. several years later, Cheri was able to return to work at BVA, building an exemplary career serving veterans and their families, aided by her own experiences as a military spouse. 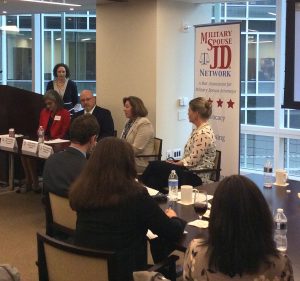 At BVA, Cheri worked her way up from Counsel, to Judge, to Chief Judge,to Principal Deputy Vice Chairman. As she rose up through the ranks, she built bridges with VSOs and MSOs, collaborating with a broad base of stakeholders on efforts to modernize and streamline the appeals process. While Cheri has a long career at BVA, her service as a mobile military spouse means she has a variety of experiences that makes her well-rounded. Her career began in private practice in Omaha, Nebraska.  She later served as an attorney ensuring the Americans with Disabilities Act was implemented and followed. She also served at the Federal Labor Relations Authority.  As her career path demonstrates, she is deeply passionate about serving veterans and those facing challenges in their lives.

At the 2016 annual MSJDN professional development conference, Cheri shared her career journey with fellow military spouse attorneys in attendance. She highlighted that although she accepted a position as an office manager while in Germany that was several steps down on the pay scale, she was later able to emphasize the management and organizational skills used in that position to enhance her resume as she pursued leadership roles in the workplace. 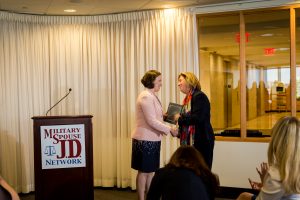 MSJDN was thrilled to recognize BVA at the 2017 Annual Reception as a nominee for the Member’s Choice Award.  With Cheri showcasing the stellar capabilities of military spouse attorneys, BVA has hired numerous military spouses over the years, and continues to do so in both attorney and non-attorney roles.  Cheri champions remote work policies allowing BVA attorneys to move with a spouse who receives PCS orders outside of the National Capital Region, while still maintaining a meaningful legal career.  The teleworking and remote work opportunities, available to all attorneys at the Board, are particularly appealing to attorneys married to service members, often faced with starting over again with each PCS.

Cheri’s professional successes shows that military spouses are intelligent, capable leaders with valuable skills in the workplace.  MSJDN is honored to include her in our ranks and it is with great pleasure that we recognize the path she has blazed for military spouse attorneys with the 2018 Professional Excellence Award.

Please join us on May 17th for the presentation and a celebration of all military spouses in the legal profession. Tickets and more information are available on the event page.