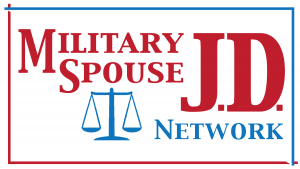 The Military Spouse JD Network has released the results of its fifth annual survey on military spouse attorney demographics and careers. MSJDN developed the survey to help assess MSJDN impact and to inform planning of MSJDN initiatives, which focus on empowering military spouses through advocacy, professional networking, and job opportunities.

The survey ran from December 4, 2017 until January 8, 2018. It was advertised via email and social media and was open to all military spouse attorneys regardless of MSJDN membership. Three hundred and fifty (350) individuals responded.

Approximately 64% of military spouse attorneys have children. Of those, the majority (76%) have one or two children, and most of those children are under six years of age.

Permanent changes of duty station (“PCS moves”) are a frequent occurrence for military families and can happen, on average, every two to three years. Nearly half of military spouse attorneys indicate they have experienced three or more PCS moves. Approximately 40% of respondents indicated only one move during the course of their careers. Some indicated they have experienced more than 10 PCS moves. Not all military spouse attorneys move with their servicemember; approximately half, at one point in their marriage, lived apart from their servicemembers in order to maintain their legal careers.

Due to PCS moves, licensure in multiple jurisdictions is a reality for many military spouse attorneys, including the associated time and money spent on obtaining and maintaining bar memberships. About one third of survey participants have taken bar exams in two or more states. Almost 30% reported paying more than $500 a year in annual mandatory bar dues, and 43% reported paying between $250 and $500 in bar dues.

Fortunately, about 19% of respondents have been admitted to a new jurisdiction without having to take an additional bar exam. One of MSJDN’s primary initiatives is to advocate for change to state licensing rules so that military spouse attorneys already admitted and in good standing in one jurisdiction may waive in to a state’s bar without examination for the period they reside in the state due to a servicemember’s orders. To date, 29 states and the U.S. Virgin Islands have passed a licensing accommodation for military spouses, and efforts are underway in 14 additional states.

An executive summary of the 2017 survey results, including easy-to-read graphs, is available here. The demographic data underscore the importance of MSJDN’s mission. Like many in the military community, military spouse attorneys crave connection with others who struggle with similar issues. MSJDN–currently at 700 members strong–provides vital support to the military spouse attorney community through its networking and professional development events, its active members’ Facebook group, and its state licensing efforts.