Reflecting on AAPI Heritage Month: How Can the Legal Profession Foster Inclusivity? 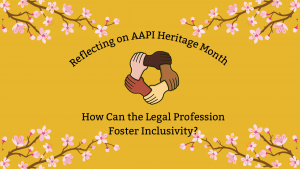 “My Administration also recognizes the heightened fear felt by many Asian American communities in the wake of increasing rates of anti-Asian harassment and violence during the COVID-19 pandemic, and the increasingly observable layers of hate now directed toward women and elders of Asian descent in particular.”

President Biden also acknowledged the inequities the AAPI community faces, which are rooted in a long history of “of exclusion, discrimination, racism, and xenophobia against Asian Americans.” As we look back on AAPI Heritage Month, MSJDN would like to take a moment to reflect on recent events, advancements in legislation, and ways that we, as members of the legal profession, can foster acceptance and inclusivity for our AAPI colleagues.

On March 16, 2021, a white gunman targeted three Atlanta-area massage parlors and killed eight people. Six of his victims were women of Asian descent, prompting nationwide outrage and focused awareness on increasing Asian hate crimes across the country. Unfortunately, the deadly shooting was only one of many recent attacks perpetrated against Asians in the United States.

In the last year, hate crimes against Asian Americans have spiked throughout the country. The organization Stop AAPI Hate received 3,795 reports of hate incidents nationwide from March 19, 2020 through February 28, 2021. According to Stop AAPI Hate’s national report, “Verbal harassment (68.1%) and shunning (20.5%) (i.e., the deliberate avoidance of Asian Americans) make up the two largest proportions of the total incidents reported.” Physical violence and workplace discrimination also affect many within the Asian American community, accounting for 11.1% and 4.5% of reported hate crimes, respectively.

In addition to impacting individuals, racially-motivated violence towards the AAPI community and the rise in xenophobia have hurt Asian-owned small businesses. CNBC recently analyzed a study by the University of California, Santa Cruz that demonstrated Asian-owned businesses were the most negatively impacted group among all demographics during the pandemic, with a 20% decrease in the number of working business owners from February to December 2020. CNBC also highlighted the additional economic impact of declining tourism in California’s Bay Area resulting from COVID-19, causing many Asian storefronts to shutter their businesses.

On a national level, federal agencies are expressing a commitment to advance diversity, equity, and inclusion initiatives and openly condemning hate crimes towards all marginalized groups. The Department of Defense Diversity, Equity, and Inclusion Statement recognizes, in relevant part: “We believe diversity is the key to innovation, inclusion is imperative for cohesive teamwork, and equality is critical to Total Force readiness.”

On April 13, 2021, a bipartisan group of 35 state Attorneys General signed a letter to Congressional leaders urging Congress to pass the National Opposition to Hate, Assaults, and Threats to Equality (“NO HATE”) Act. Based on the rise of bias-driven crimes, the proposed Act is intended to provide states with additional tools to identify and prevent hate crimes. The legislation would provide federal funds to train law enforcement on hate crimes and data reporting to the FBI, establish more hate crime hotlines to increase reporting, and allow courts to order those found guilty of hate crimes to receive education and provide community service to affected areas as a condition of supervised release. This piece of bipartisan legislation, now called the COVID-19 Hate Crimes Act, passed the House in an overwhelming 364-62 vote on May 18, 2021, and President Biden signed it into law two days later. The Act states that “the United States condemns and denounces any and all anti-Asian and Pacific Islander sentiment in any form.” The Act further lists the names of those killed in Atlanta and states that “[t]he people of the United States will always remember the victims of these shootings and stand in solidarity with those affected by this senseless tragedy and incidents of hate that have affected the Asian and Pacific Islander communities.”

This legislation is representative of efforts to change the narrative of hate and stem violence against AAPI persons on a national scale. There are, however, ways that we can effect change close to home, in our communities, and our law firms. According to the American Bar Association’s 2020 Profile of the Legal Profession, the U.S. population is 5.9% Asian, yet only 2% of lawyers are Asian—a very marginal increase from 1.6% ten years ago. Also, over the past ten years, the total percentage of Asian American associates at law firms has increased by 2.9%, while the total percentage of Asian American partners at law firms has increased by a meager 1.7%.

Albert Lin, a partner at an Am Law 100 firm, is American born and of Chinese descent. He graduated from law school in the mid-nineties and was only one of seven Asian graduates in a class of nearly 300 students. When he was in law school, affinity groups for Asian students were small or non-existent. Albert feels that a lot of progress was made in the early 2000s but that the last few years have been “disastrous for racial relations.” He believes terminology promulgated around COVID-19 (e.g., references to COVID-19 as the “China Virus” or “Wuhan Virus”) has created significant setbacks for Asian American progress. To regain ground, Albert encourages Asian attorneys to try to “be more visible.” Ways to increase visibility include doing things beyond just logging billable hours, such as actively engaging in organizations as a member, taking on leadership roles in Asian-based and broader legal groups, and participating on charitable boards where there may currently be a lack of Asian representation. For example, here are a few nonprofit and professional organizations that advance diversity, equity, and inclusion of AAPI groups:

According to Albert, “there is no one right way” to contribute to progress; it is about “finding something that you can commit to that you’re passionate about” and being passionate in a way that increases visibility of the Asian American legal community. He suggests that Asian attorneys “make an effort in whatever capacity you can. Go out and be present.”

When asked about how non-Asian attorneys can support their AAPI colleagues, Albert states that “firms can make the right moves, but it’s up to the individuals within the firm to follow up on it.” In other words, attorneys should hold their organizations accountable and make sure that firms are “walking the walk” as opposed to just paying lip service to diversity and inclusion ideas. Albert specifically mentioned that non-Asian attorneys should champion diverse attorneys seeking leadership roles and actively support the hiring of diverse attorneys.

Natalie Garcia Lashinsky, a senior litigation associate in big law and the daughter of Filipino immigrants, also offered her perspective on how to foster inclusivity in the legal profession. Natalie shared that many Asian cultures are “taught to obey” and not to “make a lot of fuss” from an early age. Her parents taught her the importance of a strong work ethic, and she grew up believing she must work even harder than her peers because she would always be seen as “an outsider.” Through her participation in many Asian legal bar associations, she has seen those teachings manifest as insecurities and imposter syndrome among her AAPI colleagues who question their own self-worth. To Asian attorneys, Natalie states: “You deserve to be here.”

To overcome these cultural differences in the workplace, Natalie urges institutions to recognize the importance of representation and visibility in leadership. “If you do not see people that look like you at the partnership or senior levels, you cannot imagine yourself in those positions,” she says. Legal employers must continue to focus on developing the pipeline for recruiting and hiring diverse associates. In addition, firms should strive to provide diverse attorneys meaningful mentorship opportunities and business development training so that they are retained, elevated, and promoted.

Finally, with regard to the recent increase in violence against AAPI persons, Natalie echoed Albert’s sentiment that the terminology and language surrounding COVID-19 has had a negative impact on the Asian community. She worries about the safety of her elderly parents and other family members, and while quarantine kept them home this past year, she remains concerned about the ongoing violence stemming from the harmful rhetoric as vaccines become more accessible and cities re-open. “It is disturbing to see these videos of crimes against the AAPI community. But we can be empowered, and you can speak out if you witness a hate crime or incident.”

If you cannot undertake the abovementioned actions to foster inclusivity, there are other ways to support the AAPI community:

Regardless of heritage or nationality, every American should feel safe from discrimination and hate. We can serve and protect each other by promoting cultural awareness and inclusion in our communities, from our nationwide network of MSJDN members to our local law offices. 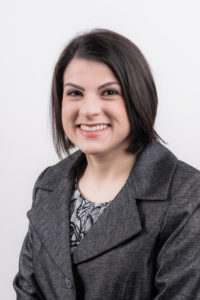 Zaina A. Niles holds a BS in Business Administration (emphases in Management and Human Resources), MHA, MBA, and JD (concentration in Alternative Dispute Resolution) from the University of Missouri. Throughout her education, Zaina held three internships in Missouri hospitals, worked in multiple career services positions, interned for a juvenile office and a federal magistrate judge, and served as the Editor in Chief for a leading ADR journal.

Post-graduation, Zaina worked at Sticklen & Dreyer, an award-winning personal injury law firm. She later joined the Kansas City office of Husch Blackwell, and Am Law 100 firm, as a part of the Litigation & Alternative Dispute Resolution team where she provides commercial clients a unique understanding of how the law, business, and healthcare align. 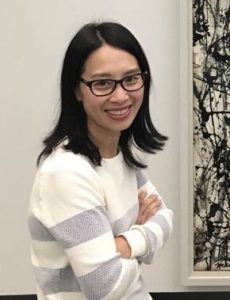