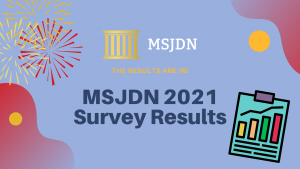 As MSJDN enters its second decade, the organization is celebrating significant progress for military spouses in the legal profession. MSJDN’s 2021 survey results give a snapshot of just how far we’ve come and the work still to be done.

·  Half of MSJDN’s survey respondents still report that they have lived separately from their service member spouse in order to maintain a legal career.

·  Military spouse attorney law school debt has increased, with over half of respondents indicating that they finished law school over $100,000 in debt. Sixty-five percent of respondents reported that they still have outstanding debt with one third having a current balance of $100,000 or more.

MSJDN is committed to continuing to advocate for military spouses and their families. Thank you for your support as we enter our next decade of service!