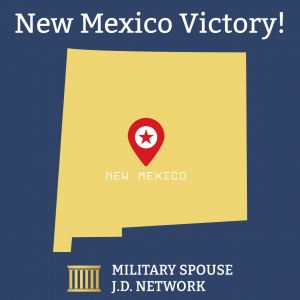 The MSJDN New Mexico Rule Change Team has been tirelessly working on adoption of this rule since 2014.  There have been countless phone calls, letters, in-person meetings, Zoom calls, and emails between the Team and the New Mexico military and legal communities.  The MSJDN New Mexico Rule Change Team has presented before the New Mexico Board of Bar Commissioners, executed a PR campaign to members of the New Mexico Bar and across social media, collected countless signatures in support of the proposed rule, and had our rule efforts highlighted in an editorial in the Albuquerque Journal.  To place into perspective how long our Team has spent on advocacy of this rule, since efforts in New Mexico began, twenty states have adopted military spouse law license accommodations.

The MSJDN New Mexico Rule Change Team filed multiple reports, including supplemental reports with the Supreme Court of New Mexico and the New Mexico Board of Bar Examiners beginning in 2018.  Since that time, the New Mexico Women’s Bar Association, The State Bar of New Mexico, and the New Mexico Board of Bar Commissioners have all steadfastly supported MSJDN’s proposed rule.  MSJDN’s rule received significant support from New Mexico attorneys and law firms, who submitted letters to the Court or signed in support of MSJDN’s rule in 2021.  The military installations of Cannon Air Force Base, Holloman Air Force Base, Kirtland Air Force Base, and the White Sands Missile Range, as well as the surrounding military communities of Clovis, Alamogordo and Albuquerque have also been crucial, strong supporters of MSJDN’s proposed rule from the very beginning.

The movement of the proposed rule through the judicial process benefited from the shepherding and interest of then-Chief Justice Michael E. Vigil, who was enthusiastic in his desire the rule be considered by the Court, as well as Victoria Garcia, the interim director of the Board of Bar Examiners, Judge Nan Nash (Ret.) on the Board of Bar Examiners, and Aja Brooks of the Code of Professional Conduct Committee.  The MSJDN New Mexico Rule Change Team is particularly grateful to all these individuals.

MSJDN New Mexico Rule Change Team also extends their appreciation to the New Mexico State Senate, who on February 12, 2022, unanimously passed Senate Memorial 7, A Memorial Reaffirming Support for Military Spouse Professional and Occupational Licensure Reciprocity and Affirming Support for the Inclusion of Military Spouse Attorneys.  Special thanks are given to Senator Roberto “Bobby” Gonzales, District 6 (Los Alamos, Rio Arriba, Santa Fe and Taos) who filed the memorial on behalf of MSJDN and testified in support of our proposal.

Finally, the MSJDN New Mexico Rule Change Team expresses their gratitude and appreciation to the Kirtland Partnership Committee (especially Paul Cassidy, Sherman McCorkle, and Jim Wible), and Marcos Gonzales, Assistant Director of Economic Development at Bernalillo County, who have all consistently supported our efforts and assisted us in the navigation of both local and state affairs affecting the New Mexico military communities.

The MSJDN NM Rule Change Team is hopeful that the passage of this important rule will positively affect access to justice.  The adoption of this rule undoubtedly will benefit military spouse attorneys who find themselves moving to New Mexico with previously dim employment prospects.  Importantly, the rule’s adoption sends a positive message to the national military community that New Mexico is a state that values and cares about military members and their families who are stationed within it, demonstrating that New Mexico wants to welcome spouses into full employment.