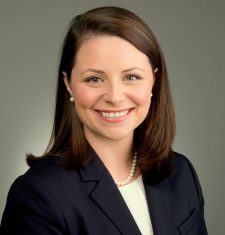 Alyn B. Beauregard has been involved with MSJDN since 2012, when she was a first year law student in San Diego.  She currently works in Washington, DC, as an attorney at a federal agency regulating the banking industry.  She previously worked as a law clerk in the U.S. District Court for the Eastern District of Pennsylvania in Philadelphia.  Alyn is a Fellow to the American Bar Association’s Business Law Section, and is actively involved in the Business & Corporate Litigation Committee and the Banking Law Committee.  She is admitted to practice law in California, Delaware, and North Carolina.  In addition to her professional involvement, Alyn is also active in the UNC Alumni Association and the Daughters of the American Revolution, and volunteers through her church.  In 8 years of marriage to a naval aviator, Alyn and her husband have experienced 3 PCS moves, 2 deployments, 14 months of geo-baching, and 3 bar exams.  Alyn previously served as the MSJDN Pennsylvania State Licensing Director.