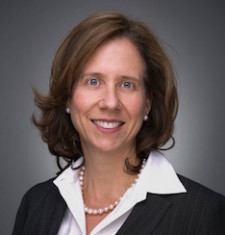 Eleanor Magers Vuono has been in the military – in one role or another — since she was born. She followed in the footsteps of her Army-lawyer-dad, joining the Judge Advocate General’s Corp after law school. She served as an assistant to the Army General Counsel, a military prosecutor, and chief of the Ft. Carson, CO legal assistance office. She also worked for the Chief Judge of the United States Court of Appeals for the Armed Forces, and as a law clerk in the U.S. District Court for the Eastern District of Virginia. Eleanor currently works at the Department of Defense in the Office of the General Counsel, co-teaches an Appellate Practice course at George Washington University Law School, and teaches a one-week fall course in Poland for The Catholic University of America, Columbus School of Law. Eleanor and her husband Tim live in Alexandria, VA with their two middle-school aged children. Tim retired in 2013 after 28 years in the Army. Eleanor has been a proud member of the Military Spouse JD Network since its founding in 2011.