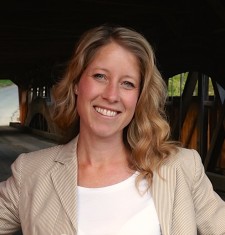 Johanna Thibault has been actively involved with MSJDN since January 2015 working on state licensing efforts in Tennessee. In July 2015, she took over as Tennessee State Licensing director, and further stepped into the role as MSJDN Blog Manager in November 2015.  Johanna is an environmental and energy law attorney that grew up in the military with a father in the Air Force, and then married her law school sweetheart ten years ago before he joined the Army JAG Corps. Johanna is barred in Vermont and Virginia. She clerked for the Nuclear Regulatory Commission in D.C., and served as a legal assistance attorney for two years at Fort Lee in Virginia. During her husband’s tour in Germany, she obtained her LL.M. in Environmental Law, and currently teaches energy law at Vermont Law School and Tulsa School of Law for their online degree programs. She is also Of Counsel for Hollingsworth Pack, an international architectural/engineering firm, and volunteers on several committees in her home village in Vermont. Her husband recently resigned from active duty and is now in the Army Reserves. They relocated back to Vermont where they are happy to leave the transient military life and set up deeper roots in their local community.