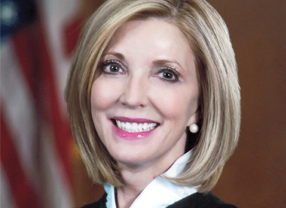 MSJDN is pleased to announce our nomination of Justice Sandee Marion to receive the Sarah T. Hughes Women Lawyers of Achievement Award. Justice Marion is thoughtful, intelligent, a consummate professional, and a military spouse attorney! Not only has she served on the bench, but she has also served our great nation alongside a member of the United States Uniformed Services.

The Sarah T. Hughes Women Lawyers of Achievement Award honors the accomplishments of women who have achieved outstanding recognition in their professional area and paved the way for success for other women attorneys. We believe Justice Marion serves as an inspiration for all women attorneys, as well as our membership. Seeing a fellow military spouse achieve the highest levels of professional success is incredibly motivating to military spouses who are in the trenches, trying to figure out how to balance the demands of their own careers with those of their servicemember spouses.

Justice Marion currently sits on the 4th Court of Appeals in San Antonio, a position she has held since 2002. Prior to that, she was a probate judge in Bexar County and in private practice in San Antonio. Justice Marion is very active in the San Antonio Bar Association’s Community Justice Program, of which she is currently a co-chair, which provides pro bono services and clinics to underserved populations. She has achieved her professional success and served her community all while supporting her husband’s military career. “Justice Marion serves as a tremendous example to her fellow MSJDN members that they can serve their country as military spouses and still build successful, fulfilling careers in the legal profession,” said Military Spouse JD Network President Rachel Winkler.

The award will be presented at the Women and the Law section’s annual meeting, held during the State Bar of Texas Annual Meeting on June 26-27, 2014.