Homefront Rising returns to D.C.! MSJDN and In Gea 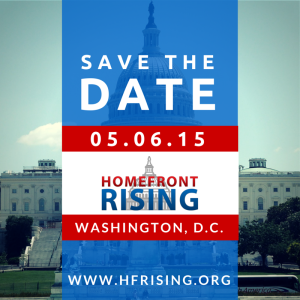 r Career will co-host a full day of inspiration and education on May 6, 2015 at the historic Army Navy Club in Washington, D.C. This marks the second year the innovative political education seminar for military spouses will take over the Capitol City.

Homefront Rising is a non-partisan event that trains military spouses to engage in the political process from City Hall to Congress. Military spouses who attend Homefront Rising learn how to change the political conversation by becoming a voice of influence and serving in public office. Topics scheduled for May include effective engagement, fundraising, political appointments, and much more. Visit hfrising.org for the agenda and more information on the seminar.

The momentum continues on May 6th, with 2016 on the horizon. Kathleen Shanahan will return to share her passion and advice for military spouses seeking to enter the political arena. Other speakers scheduled include Jocelyn Benson, a military spouse, law school dean, and former candidate for Michigan Secretary of State; Kara Bue, former Deputy Assistant Secretary of State; and Vice Adm. (Ret.) Norb Ryan, President of the Military Officers Association of America. Attendees will also be treated to messages from several military spouses currently serving in public office.

MSJDN and In Gear Career are both committed to empowering members of the military community to make positive change for military families. Military spouses have become adept at calling on our elected officials to demand that they meet the needs of those who serve. But we also need members of our own community among the elected officials making decisions that affect it. It is time for the homefront to rise!

Join us on May 6th in Washington, D.C. for Homefront Rising to hear from the experts and network with like-minded military spouses. And don’t run off after the seminar – our Annual Reception is also that evening at the Army Navy Club. Cap off a day of political education with a celebration of military spouse attorneys and our supporters!

Homefront Rising tickets are available now. Don’t wait – save your seat today to get ready for 2016 and beyond!