“You can and you must!” This was the opening message delivered to the attendees at Homefront Rising, a political boot camp for military spouses interested in running for office co-hosted by MSJDN and In Gear Career. Jocelyn Benson, a military spouse and former candidate for Michigan Secretary of State, started off the day with encouragement and advice for the 50+ military spouses in attendance. Jocelyn highlighted how military spouse get things done and the need for problem solvers in public office, not just at the federal level, but in state and local positions as well. She acknowledged the tough aspects of campaigning and holding office, but encouraged attendees to work hard and have fun with the process. 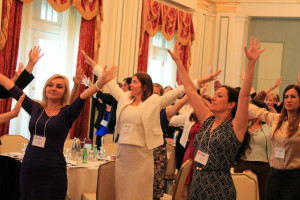 next, Joel Silberman, one of the nation’s premier media strategists, had the crowd on their feet. Attendees were moving around the room, focused on controlling and projecting their presence. Joel provided an entertaining and informative workshop on how to build an authentic public image and effectively engage with the media and the public. He encouraged members to be themselves, but to have a message formulated to meet the attention span of the intended audience. “Tell your story,” said Joel, but finding a meaningful way to connect your story with the audience is the key to effective communication.

Panels throughout the day focused on critical information for spouses interested in engaging in the political process, from effective communications to fundraising and much more. Experts from military family support organizations like the American Legion, Military Officers Association of America, and the National Military Family Association gave advice on communicating with elected officials. Joyce Raezer from NMFA encouraged attendees to do their homework: don’t just come with a problem – come with a solution! Rene Campos from MOAA talked about engaging on a local level and encouraged attendees to get involved at their duty stations, on and off base. Attendees were encouraged to capitalize on their time at each post to build a network of military and civilian supporters that spans the states. While local connections are important when the time comes to run, having a large network across the country can only help.

For military spouses not interested in hitting the campaig 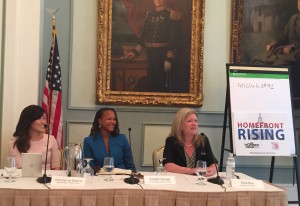 During lunch, the military spouses networked and connected with each other and the panelists. Attendees were also treated to a fascinating lecture from Jennifer Lawless, Director of the Women & Politics at American University. She dispelled some of the myths related to the low number of women in office and encouraged military spouses to break out of the statistics and run!

After lunch, Brandon Fureigh from the Truman Project prepared attendees to think strategically about their communications. Everyone wants to know, “Do you understand what it’s like to be me?” Build your message around identifying shared values and connecting with personal stories. “We are constantly communicating emotional content whether we want to or not. So being deliberate is key,” he said. For those running for office, be able to articulate what you believe and connect it with others. 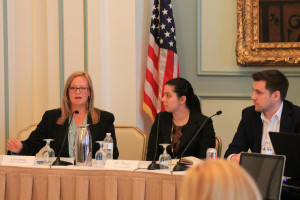 he @Politics through #SocialMedia panel delved into using online platforms to connect and engage. For military spouses with potential supporters across the country, social media can be a critical tool. Lori Volkman of Trajectory Communications shared the depressing news that goldfish have longer attention spans than human beings. Chris Stelmarski, Vice-President of Murphy Vogel Askew Reilly, and Jo Jensen from DDC Public Affairs shared their advice on how to remain authentic online while carrying out an effective communications strategy.

The final panel of the day looked forward to the 2016 election cycle. Jim Davis, Former House Representative from Florida, Seth Lynn of Veterans Campaign, Neri Martinez from the Future Majority Project, and Anthony Kusich, Deputy Chief of Staff to Congressman Patrick Murphy, all shared their insights on the upcoming election cycle and suggestions on how military spouses can get involved. “Where there is a will, there is a way,” said Neri Martinez. Interested spouses without any political experience were encouraged to volunteer now to start building experience and understanding of campaigns. This panel reinforced the idea that this cycle’s volunteer is next cycle’s manager or candidate. Jim Davis touched on the “powerful” voice of military 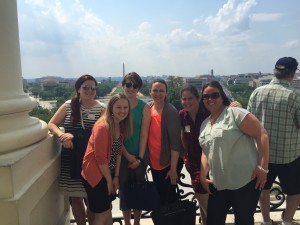 spouses and advised attendees to focus on that aspect when seeking a position on campaign staff.

After a full day at Homefront Rising, military spouses left feeling educated and inspired. They’ve returned to their corners of the country, equipped with the knowledge and resources to be heard in the political conversation. Stay tuned to www.hrising.org for news on how attendees put this education to use and future Homefront Rising events.