At this year’s Kentucky Bar Association Annual Convention in June, I had the pleasure of speaking before the Kentucky Supreme Court alongside MSJDN President Elect Josie Beets. 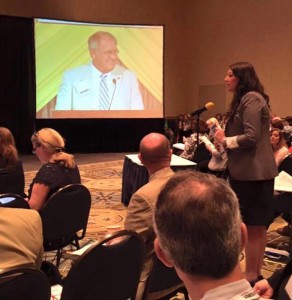 The Commonwealth of Kentucky included a Proposed Amendment to the Rules of the Supreme Court, SCR 2.113 Military Spouse Provisional Admission, which was addressed at the Supreme Court Rules Hearing.

The Commonwealth’s proposed rule, which was modeled after the Virginia rule, needed a few modifications to properly serve the underlying mission of the rule. Josie presented on behalf of MSJDN, and specifically addressed the changes that would better serve the military spouse community in the Commonwealth of Kentucky.

The Kentucky rule included a provision requiring the military spouse attorney to have achieved a passing score on the MPRE as it is established in Kentucky at the time of the application.  However, the MPRE is not a requirement for attorneys admitted under reciprocity or the in-house counsel rule in Kentucky, and thus should not be a requirement for military spouse attorneys admitted under this rule.

I had the opportunity to share my personal perspective as an military spouse attorney who suddenly found myself moving to Kentucky alone, as my husband was deployed immediately upon reporting to Fort Knox, and preparing to take yet another bar exam in a state where I did not know a single person.  Not only did I have no job prospects, but I had no attorney connections.  Ultimately, it would have been unlikely that I could have practiced law in the Commonwealth of Kentucky under the rule as is was originally drafted.

The reception to the proposed changes to the rule has been overwhelming positive, finding many supporters of throughout the Commonwealth and beyond, to include Retired Clerk of the U.S. Supreme Court Gen. William Suter, Senior Judge Joseph Hood of the U.S. District Court, Eastern District of Kentucky, and Senior District Judge Charles R. Simpson III of the U.S. District Court, Western District of Kentucky.  Kentucky Secretary of State, Alison Lundergan Grimes, has also been extremely gracious in her support of our rule change efforts.  In addition, we have the support of five retired Army Chiefs of Staff, MOAA President Vice Admiral Norb Ryan Jr., three Kentucky law school deans, law school students, as well as many other military spouse attorneys.

The Kentucky Supreme Court will make the final determination on the wording of the Proposed Amendment to the Rules of the Supreme Court, SCR 2.113 Military Spouse Provisional Admission sometime early this fall.  We could not be more thrilled at the outpouring of support for military spouse attorneys and look forward to positive changes in the near future.