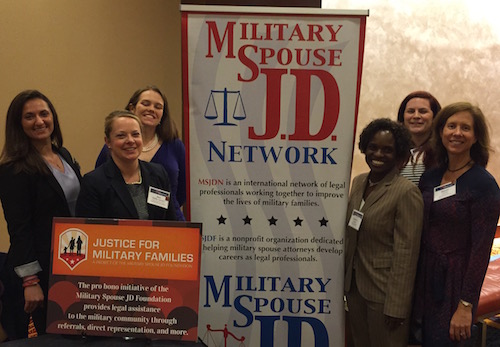 Last year, the first ever Veterans’ Legal Career Fair took place in Washington, D.C with the goal of matching veteran and military spouse attorneys with law firms, corporate legal departments, and government agencies. Hosted by Orrick, the event was a huge success, drawing employers and candidates from around the globe. MSJDN members traveled from North Carolina, Tennessee, Rhode Island, and other parts of the country to take part in the historic event. Now the event returns for the second year on April 29-30, 2016.

The inaugural Veterans’ Legal Career Fair connected 150 candidates with 45 employers, including Microsoft, Morgan Stanley, and Shearman & Sterling. This year’s event will expand on last year’s success, beginning with an evening of panels and networking on April 29th, and followed by a day of one-on-one interviews on the 30th. Major employers including DLA Piper, Latham and Watkins, and Sheppard Mullin are taking part.

VLCF is the only event of its kind in the United States focused on legal jobs for transitioning or former servicemembers and active duty spouses. The support from the legal community for veterans and military spouses continues to grow with events like VLCF focused on meaningful support in the workplace through hiring commitments. Interested candidates or employers can find more information on the career fair’s website here. Bidding for interviews begins March 1st, so don’t wait – register now!