MSJDN is thrilled to announce the featured speaker for our upcoming Annual Reception on May 12th. U.S. Air Force Major General Sami D. Said, husband of attorney and MSJDN member Tara Said, will deliver remarks on the meaningful impact MSJDN has had in the personal lives of military spouse attorneys and their families, including his own. 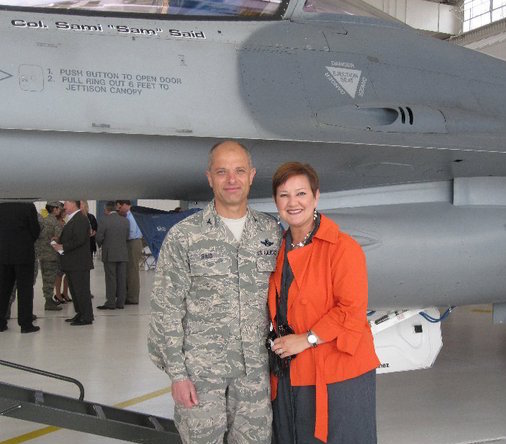 Tara was living in Alabama when her husband joined the Florida Air National Guard. After his initial training, they moved to Jacksonville. She attended the University of North Florida’s Paralegal Program and went on to work as a paralegal for about eight years in a private firm. They were fortunate to be able to stay in one place while her husband was a full time pilot for the 125th Fighter Group. When Florida Coastal Law School opened, she attended in the inaugural class. After graduating in 1999, she worked as plaintiff’s counsel in the same firm where she had been a paralegal. Being in one place for so long really allowed Tara an opportunity to get to know the legal community and make Florida her home.

Tara started working as in house appellate and trial counsel for Liberty Mutual and stayed in that job in Jacksonville for 11 years.  During that time frame, her husband was selected to go to Harvard to do a National Security Fellowship, which eventually led to him being activated and transitioned into regular active duty. The Air Force then sent him on to Nellis Air Force base in Nevada, a tour in California, two tours at the Pentagon in Washington D.C., and over to Afghanistan.

The Saids had purchased a home in Jacksonville. Tara was very established in the legal and local community. She was on the Executive Committee for the Florida Bar Workers’ Compensation Section, the board for the E. Robert Williams American Inn of Court, and involved in a local church. Those relationships take time to develop, so the Saids decided it would be best for Tara’s career for her to stay in Florida while her husband moved around. But it really took a toll. Each time new orders and a new duty station came up, they would look into how long he would be there, how long with it take Tara to prep and take that bar exam, and then find a job. Each time, they decided by the time Tara had jumped through all of the hoops to practice law in another state and to secure employment, he would be moving again.

By their 7th year of living apart, Tara was beside herself. She could not remember which side of the bed he slept on. “Their” friends were now “her” friends or “his” friends. They knew they had to make a change. By that time, Tara was a senior attorney and had made a name for herself in the legal community. She had to decide – would she continue to stay in Florida alone and keep progressing in my career or give up her house, her career, and her life to move to be with him and start over?

After a deployment to Afghanistan, the Saids decided life was too short and they needed to live under the same roof. Her husband was reassigned to the Pentagon and they made the very hard decision for Tara to give up her job in Florida and move to D.C. hoping to secure Federal employment. Thanks to MSJDN and the military spouse attorney jobs board, she was able to connect with other military spouses and found out about a term position that would utilize her work skills with the Solicitor’s Office at the US Department of Labor. Tara was with this job for several years, until just recently transitioning to a position with the U.S. Army.

Tara says, “We choose the person we love and accept the military life style but it comes with great difficulties. While I did not sign up for the constant moving and challenges of being a professional married to a mobile active duty military member, it comes with the responsibilities of being a spouse. Anything that is done to assist military families is so appreciated.”

Thank you to Tara and Major General Said for sharing your story and the impact of this organization. We look forward to celebrating five years of MSJDN with you!

Join us at the 2016 Annual Reception on May 12th. Tickets and information available here.