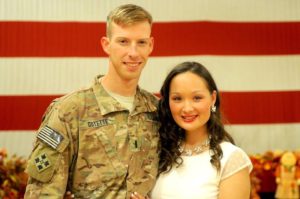 Over the July 4th weekend, First Lady Michelle Obama was interviewed by the Military Times in recognition of New York becoming the 50th state to enact legislation addressing license portability for military spouses. As part of the interview, the First Lady shared the story of Katherine Goyette, an MSJDN member and Army spouse practicing as a Deputy District Attorney in Colorado. Katherine’s story highlights the need for attention on this issue and demonstrates the success of these common sense solutions to support military families.

Thanks to the Colorado military spouse attorney licensing rule, Katherine didn’t have to remain in Kansas to continue her career – she was able to relocate to Colorado Springs with her husband and find meaningful employment without the repeated costs, delays, and burdens associated with yet another bar exam. MSJDN is thankful for the leadership of Colorado’s legal community resulting in this rule that has already made a powerful impact on military families just two years following its enactment.

As the First Lady (also an attorney!) shared, only three states allowed military spouses to transfer their professional licenses when she and Dr. Biden formed the Joining Forces initiative to better support military families. As of last week, all 50 states have worked to streamline military spouse licensing through legislative fixes. MSJDN joins in the celebration of this monumental milestone and the relief it brings to military spouses across the country. We are extremely grateful to the First Lady and Dr. Biden for their drive and passion to pursue this issue impacting so many military families.

However, as recognized by Mrs. Obama in the Military Times article, “we know that there are still plenty of gaps and challenges that we need to work on, so as far as I’m concerned, our work here definitely isn’t finished.” MSJDN members know that attorneys are generally excluded from legislation regarding licensing, as attorney licensing is typically overseen by the state’s Supreme Court. While MSJDN has made significant headway on this issue, guiding 19 jurisdictions to adopt military spouse attorney licensing accommodations to date, our State Licensing team continues to advocate in Connecticut, Georgia, Kansas, West Virginia, and other states without rules in place.

While the existing legislation may not benefit MSJDN members, national attention on this issue is critical. We celebrate the success of Joining Forces as we continue to work together to remove barriers for military spouses and increase financial stability for military families.