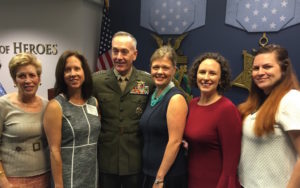 Today, the Military Spouse JD Network (MSJDN) was honored as one of five non-profit organizations recognized for their innovative programs improving military quality of life. General Joseph Dunford, Chairman of the Joint Chiefs of Staff, provided remarks at the 17th annual Newman’s Own Awards Ceremony at the Pentagon today, as awards totaling $200,000 were presented.

Newman’s Own, Fisher House Foundation, and Military Times sponsor the annual competition, which seeks to reward ingenuity for programs that benefit service men and women and their families. Over 200 entries were submitted for the 2016 program. Six judges evaluated each entry based on each organization’s impact to the respective communities, creativity and innovation. Judges for the 2016 competition were: Mrs. Ellyn Dunford, Mrs. Ricki Selva, Mrs. Tammy Fisher, Mrs. Suzie Schwartz, Mrs. Lynne Pace, and Mr. Jeffrey Smith. Including this year’s awards, the annual competition that began in 1999 has recognized 169 programs with awards totaling $1,525,000. 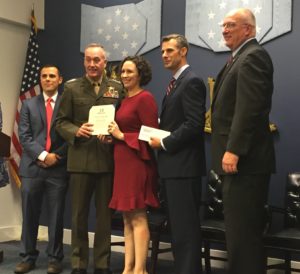 In addition to the recognition by the program sponsors, MSJDN also received a $37,500 award from Newman’s Own. The other non-profits recognized in this year’s class of awardees were Give an Hour, Dry Hootch Peer Support Program, Wounded Warrior Cyber Combat Academy, and Project Mend. General Dunford was joined by Jeffrey Smith, Vice President of Operations of Newman’s Own, Inc.; Ken Fisher, Chairman & CEO of Fisher House Foundation; and Tony Lombardo, Executive Editor of Military Times, in presenting the awards.

“Every day our military service members and their families face unique challenges that come with their dedication to serving our nation,” said Mike McGrath, CEO of Newman’s Own, Inc. “We are proud to support organizations that help make a difference in our military community.”

Past and present MSJDN leaders were on hand for the ceremony, held in the Hall of Heroes. “This award is recognition of the work MSJDN has done to support licensing accommodations and serve our military community through pro bono work,” said Josie Beets, MSJDN President, who accepted the award on behalf of the organization.

MSJDN is extremely grateful to Newman’s Own, Fisher House Foundation, and Military Times for this honor celebrating the incredible achievements of the organization over the past five years along with the continuing support provided for military families through MSJDN programs.

About Newman’s Own®, Inc.: Newman’s Own, Inc., founded by Paul Newman in 1982, offers great tasting, high quality food and beverage products, including salad dressings, pasta sauces, frozen pizza, salsa, frozen skillet meals, refrigerated lemonades, cookies, snacks and pet food. Newman’s Own Foundation continues Paul Newman’s commitment to use all royalties and profits that it receives from the sale of its food products for charitable purposes.  Over $430 million has been given to thousands of charities since 1982. For more information, visit www.newmansown.com.

About Military Times: The Military Times newsweeklies and digital platforms are the trusted source for independent news and information for service members and their families. The military community relies on the Army Times, Marine Corps Times, Navy Times and Air Force Times for reporting on everything important to their lives, including: pay, benefits, finance, education, health care, recreational resources, retirement, promotions, product reviews, and entertainment. Military Times is published by Sightline Media Group.

About Fisher House Foundation: Fisher House Foundation is best known for a network of comfort homes where military and Veterans’ families can stay at no cost while a loved one is receiving treatment.  These homes are located at major military and VA medical centers nationwide, and in Europe, close to the medical center or hospital it serves. Fisher Houses have up to 21 suites, with private bedrooms and baths.  Families share a common kitchen, laundry facilities, a warm dining room and an inviting living room.  Fisher House Foundation ensures that there is never a lodging fee.  Since inception, the program has saved military and Veterans’ families an estimated $320 million in out of pocket costs for lodging and transportation. Fisher House Foundation also operates the Hero Miles Program, using donated frequent flyer miles to bring family members to the bedside of injured service members as well as the Hotels for Heroes program using donated hotel points to allow family members to stay at hotels near medical centers without charge.  The Foundation also manages a grant program that supports other military charities and scholarship funds for military children, spouses and children of fallen and disabled Veterans.