MSJDN is thrilled to announce that the 2017 Professional Excellence Award will be presented to member Rebecca Bresnik at the Annual Reception on May 10th. Rebecca Bresnik is Assistant Chief Counsel for International Matters at NASA, a mom, and the wife of an astronaut. Though she’s proud to be the wife of Col. Randy Bresnik (USMC, Ret.) Rebecca has forged a reputation for herself in NASA and the global aeronautics and space community.

As Assistant Chief Counsel at NASA, Rebecca works closely with global partners on negotiating international agreements relating to space exploration and is the lead attorney for the International Space Station. She’s received several awards, including the NASA Exceptional Service Medal (2014), NASA Exceptional Achievement Medal (2011), NASA Legal Teamwork  Award (2012, 2013, 2016, 2017) and the Johnson Space  Director’s Commendation Award, (2008). She has also been recognized by her law school for her professional accomplishments. She earned her Juris Doctorate from Rutgers School of Law and graduated from the University of Delaware with a Bachelor’s degree in international affairs and Asian Studies.  She also earned a Master of Arts degree in Asian Studies from the University of Texas at Austin and a Master of Laws degree in International Law from the University of Houston Law Center.  She also attended the Space Odyssey Institute as a recipient of a NASA Fellowship.

As an astronaut wife and military spouse, Rebecca has had to make her own share of difficult decisions in balancing her professional career and her husband’s military career. Though both work at NASA now, they found their way there independently. Rebecca’s legal career journey began when she worked at the Pentagon in 2000. She had worked her way up at the Pentagon from summer legal intern to Associate General Counsel.  She was at the Pentagon during the 9/11 attack and worked numerous issues in support of “Operation Iraqi Freedom”.  Also during her time at the Pentagon, she worked for the Undersecretary of the Air Force for International Affairs negotiating international armaments cooperation agreements. It was during her time at the Pentagon she met her soon-to-be husband, Randy Bresnik. At first, Rebecca hesitated to pursue a relationship with him because she was concerned about the difficult choices that come with being a military spouse with a professional career.

After two months of dating, Randy moved to California where he was based out of MCAS Miramar and slated to deploy to support the Iraqi War.  Thus, the first year of their relationship, Randy lived in California and was deployed, while Rebecca lived in Washington, D.C.  When Randy returned from Iraq, he proposed, asked her to move to California with him, and told her he had applied to be an astronaut.  Given the long odds of acceptance, she didn’t think anything would come of the astronaut application. Rebecca decided to follow her heart and move to California to be with Randy, but only agreed to move once she found a job.  Like many military spouse attorneys, she had student loan debt with which she did not want to burden her husband.

Not being licensed in California, Rebecca accepted a quasi-legal job as International Business Manager at Northrop Grumman Unmanned Systems. She was responsible for establishing a joint venture company in Germany, which would act as the national prime contractor in providing unmanned air vehicle capabilities to the German Ministry of Defense.  Only 5 months into this new job, Rebecca found out that Randy was selected to be an astronaut and that, once again, the Bresniks would have to pick up and move.  However, Rebecca had committed to Northrop Grumman for one year and was unable to move until she fulfilled that commitment.  Newly married, they were living apart again for many months.   During this time, Rebecca continued 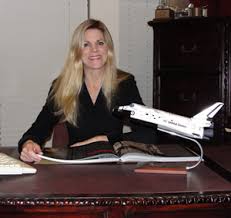 her job search in Texas and many new opportunities became available, which she claims was a mixture of luck and contacts through the military. Ultimately, her hope of being offered a position by NASA came into fruition and she has been working as attorney at the Johnson Space Center since.

The Bresniks now have a son, Wyatt, and daughter, Abigail, who was born while Randy was on orbit during his first space mission. This was just the second time a U.S. astronaut became a parent while in orbit. Randy is currently preparing for his next space mission for which he launches in less than 3 months; Rebecca is preparing again to support her family during this unique deployment.

Rebecca is a member of MSJDN because she enjoys being a part of a community for military spouse attorneys, a community that she did not have when she began her legal career.  The military community 20 years ago instead showed very little to no support for professional spouses.  She strongly believes it is an obligation to show support for one another and even more importantly, to pave a pathway for new military spouses that choose a career as an attorney.  She is committed to supporting other military spouses in the profession and has been a strong supporter of MSJDN’s licensing efforts.

A former military spouse, now an astronaut’s wife, Rebecca demonstrates the professional excellence military spouse attorneys are capable of when given the opportunity to excel in their careers.  Her advances in her own professional endeavors, while also supporting her family and her service member, serve as an inspiration to all military spouses in the legal profession.

It is with great pleasure that MSJDN recognizes Rebecca Bresnik for her established and continuing excellence as a military spouse in the law.  Please join us tomorrow for the Annual Reception, award ceremony, and celebration of military spouse attorneys.